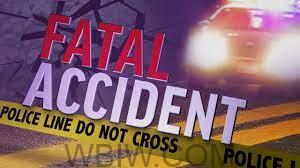 VIGO CO. – Police have identified the person killed in a crash on Doberman Street on Friday.

The Vigo County Sheriff John Plasse says 81-year-old Kenneth Hauptli was killed when his vehicle crashed into a train.

The accident was reported around 7:00 p.m. on Doberman Street just south of Gross Road at the railroad crossing.

Police said Hauptli was the only person in the car during the crash. He was pronounced dead at the scene.