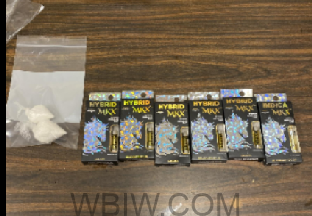 INDIANA – This past weekend, Lowell Troopers participated in the 6-state marijuana and criminal patrol effort.  This blitz involved troopers from the following states:  Indiana, Pennsylvania, Ohio, Michigan, Kentucky, and West Virginia.  During the blitz, troopers made 3 marijuana possession arrests.

During one of those traffic stops, 27 grams of cocaine were in the person’s possession.  Jamie Dines, 42, from Stevensville, MI, was charged with the following offenses dealing cocaine, possession of cocaine, and possession of marijuana.

Dines was incarcerated at the Porter County Jail.