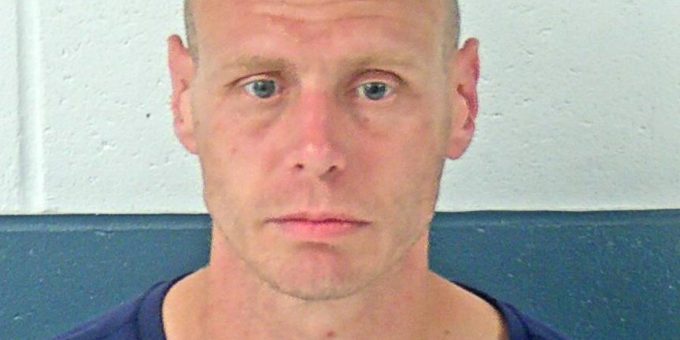 BEDFORD – A Bedford man was arrested on Wednesday after Indiana State troopers stopped the vehicle he was a passenger in.

The troopers were in the process of looking for a wanted man who they had information was in the area.

Officers were attempting to identify the people in the vehicle when it traveled away from them and turned south. It then quickly turned east onto 23rd Street almost as soon as the troopers pulled out to catch up to the vehicle.

As the troopers turned east on 23rd Street, the driver of the Hyundai turned left into the parking lot of St. Vincent Dunn Hospital without using a turn signal.

The troopers initiated a traffic stop.

The female driver told the troopers she didn’t have her driver’s license with her and that it might be inactive.

The male passenger was 38-year-old Elijah Wright. He told the troopers he didn’t have his identification with him.

One of the troopers noticed Wright was “very nervous” and was avoiding eye contact. Wright was asked to step out of the vehicle and a trooper noticed he was “gripping something tightly in his hand”.

The trooper then asked to search his person and Wright denied that request.

Wright got “a bit agitated and said he was just a passenger and had done nothing wrong”.

A canine was requested to the scene. Canine Zazu alerted officers to possible drugs in the vehicle.

The trooper asked Wright to show him what he was chewing on. Wright refused to spit out what was in his mouth, although the trooper gave numerous commands. The trooper then used a  “mandibular angle” pressure point technique that caused Wright to spit out a plastic bag.

Wright was detained after he tensed up, yelled and spit at the troopers.

The plastic bag that Wright was chewing on had broken open and most of the contents had been swallowed. The bag tested positive for meth.

The female driver was released from the scene.

No illegal substances were found in the vehicle.