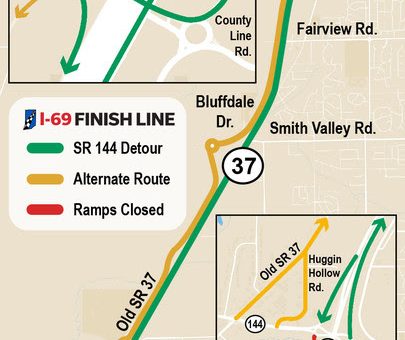 JOHNSON CO.– Another I-69 interchange is expected to partially open Thursday night, removing a stoplight for through traffic on State Road 37.

Crews expect to shift S.R. 144 traffic onto the new pavement and the bridge over the future I-69. Two new ramps will open to provide access:

Drivers should stay alert as other vehicles adjust to the new traffic pattern.

The traffic shift will allow earth-moving crews to place and compact dirt where traffic is currently using S.R. 144. Two movements will be detoured until the ramps south of the S.R. 144 bridge are completed late this year:

The detour for heavy highway traffic follows northbound S.R. 37 to County Line Road, where drivers can loop through the interchange and reenter southbound S.R. 37. U-turns are prohibited where the left-turn lane is closed at the Smith Valley Road traffic signal.

The Bluffdale Drive and Old S.R. 37 service roads are connected west of S.R. 37, serving as another alternate route. Drivers can access these roads from the County Line Road interchange or the S.R. 37 signal at Fairview Road.

The temporary signal at Banta Road remains open to local traffic south of S.R. 37 until the remaining S.R. 144 ramps open late this year.