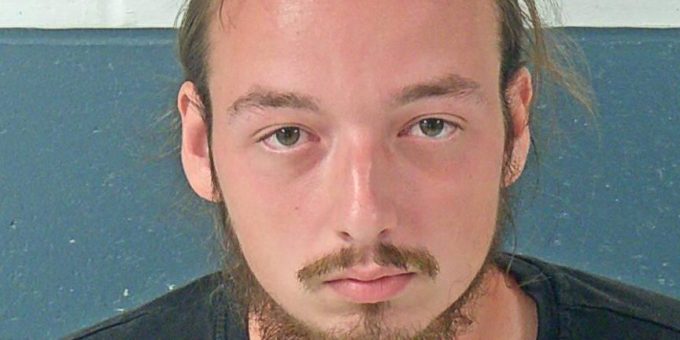 BEDFORD – A Bedford male was arrested after a warrant was issued for his arrest on drug charges.

Police arrested 26-year-old David Robbins, of Bedford, on charges of possession of a narcotic drug, public intoxication, and possession of drug paraphernalia.

According to a probable cause affidavit, on August 23, 2022, at 9:17 p.m. Bedford Police officers responded to Circle K at 14th and L streets after a 911 caller reported an aggressive man in the store.

The caller said the man was “doped up”. A second caller reported “there is a problem in the store and the man has a permit to carry a handgun”.

Robbins would not keep his hands out of his pockets after being told numerous times to do so.

In Robbins’ left pocket police found a plastic case that contained  8.14 grams of fentanyl. A red digital scale was found in Robbins’ backpack.

Once placed in the patrol vehicle, Robbins’ eyes rolled into the back of his head, he became lethargic and was making incoherent statements.

He was administered a dose of Narcan and was transported to IU Health Bedford Hospital for treatment. He was left in the care of hospital staff due to his level of intoxication.

The clerk at Circle K reported Robbins had locked himself in the bathroom and stayed in there for more than 40 minutes. The clerk was able to unlock the door and found Robbins on the floor and he was told to leave the store. The clerk said Robbins appeared disoriented and that he was under the influence of something.

The clerk called 911 when Robbins preceded toward the back of the store and stood, staring at the back wall.

The information was forwarded to the Lawrence County Prosecutor’s Office and a warrant was issued for Robbins’ arrest.