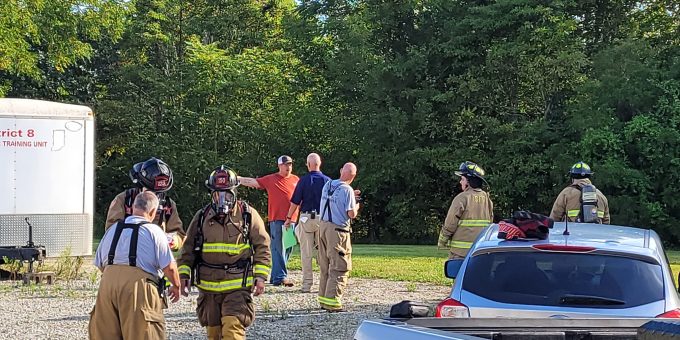 BEDFORD – The Shawswick Volunteer Fire Department held a mock disaster training on Saturday, in part with the Lawrence County Local Emergency Planning Committee (LEPC) to better prepare the department in case of a major emergency.

The plan is to teach VFD Firefighters how to best react in certain situations they may not interact with regularly, by using what they have been trained and hands-on practices to do their job.

“This is an annual training event that helps us use critical thinking when major emergencies occur and in anticipation of potential disasters that could potentially happen,” said Shawswick VFD Firefight Michele Knoy. “It’s not a matter of if it will happen in most cases, but a matter of when. Being prepared is a vital key to us being able to help those in need as well as we can.”

Lawrence County Emergency Management Director, Valeri Luchauer was on-site, ensuring that the Firefighters were reacting properly to each situation.

“We have teamed up with the Town of Oolitic and their VFD, Marion Township VFD, and the City of Mitchell to use specific situations more tailored to their communities,” said Luchauer. “We practiced a Lehigh incident with the new plant going in for Marion, and in Oolitic we had them react to if a chemical bomb had been set off in Town Hall, how they would react and set control following leadership being unable to lead the recovery. Everything that could happen is planned out, and they practice how they would handle it, in the event something actually happens.”

The Shawswick VFD practiced chemical emergencies, traffic hazards, and accidents, and even had a scenario where a crop duster simulated a crash with the chemicals on board to put out fires. All scenarios practiced on Saturday are considered to be something the VFD may encounter at some point in their service.