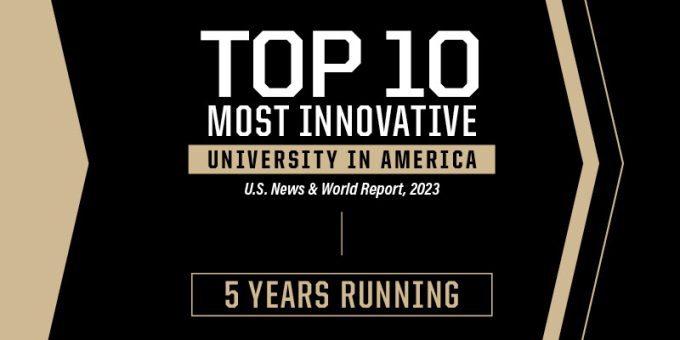 WEST LAFAYETTE – Striking business-research partnerships that boost the state’s economy and address real-world needs while producing job-ready graduates, Purdue University continues to rank among the most innovative schools in the nation.

Purdue, whose graduates earn an average starting wage of $62,452 – straight out of college – is the nation’s No. 7 Most Innovative School (No. 3 among public universities) in the newest U.S. News & World Report Best Colleges rankings.

“We couldn’t be prouder that, once again, Purdue has been recognized as one of the country’s most innovative universities,” said Jay Akridge, provost and executive vice president for academic affairs and diversity. “Boilermakers are innovators, and you can be sure that we are focused on delivering an even more impactful residential learning experience to our students going forward as we continue to seek pioneering solutions to the world’s most difficult challenges.”

This newest ranking adds to an impressive list of recent Purdue rankings. Just last week, Purdue was ranked for the second straight year No. 6 internationally in utility patents in a report from the Intellectual Property Owners Association and the National Academy of Inventors. In August, the university was voted No. 4 in Morning Consult’s “Most Trusted Universities” study. Smart Asset named Purdue No. 1 in-state and 12th nationally for Best Value Colleges. Purdue is ranked the third-best college campus for freedom of speech in the just-released free speech rankings by The Foundation for Individual Rights and Expression (FIRE)/College Pulse.

Within the last year, Purdue has extended partnerships with Rolls-Royce, enhanced hypersonics research, and put its stamp on the semiconductor industry, which is essential to the nation’s competitiveness. The university has opened new pathways of study to help address global semiconductor/microchip shortages that are affecting everyday life. It also struck a partnership with MediaTek, a leading global fabless chipmaker, to open the company’s first semiconductor chip design center in the Midwest, to be housed on Purdue’s campus. SkyWater Technology chose Discovery Park District at Purdue adjacent to Purdue’s campus.

The $1 billion, 400-acre Discovery Park District at Purdue is bustling, with new housing, well-paying jobs and learning, and research opportunities.

The U.S. News & World Report rankings were released Monday (Sept. 12). At No. 51 overall among all colleges and No. 18 among public universities, Purdue is again well represented.

In internships, Purdue is No. 7.

“We are proud of the whole list of exciting rankings for the university. In particular, it is a reflection of the dedication by our faculty and staff and the quality of our students that Engineering retains the top-10 undergraduate ranking while growing significantly to become the largest in that distinguished group,” said Mung Chiang, Purdue’s president-elect and executive vice president for strategic initiatives, who served as dean of the College of Engineering until July 1 of this year.

“The agricultural and biological engineering faculty, staff, and students continue to build an incredible department that is nationally and world-renowned for the difference it makes in critical areas of discovery and innovation,” said Karen Plaut, the Glenn W. Sample Dean of Agriculture.

Purdue’s computer science programs in the College of Science moved up two spots, to 16th in the rankings. Its cybersecurity program is seventh; software engineering 10th; and programming, data analytics, and computing systems all 13th. The artificial intelligence programs are 19th.

Computer science at Purdue continues its rapid rise, moving up two spots from last year to No. 16 overall, bolstered by the recent addition of new majors in artificial intelligence and in data science. Cybersecurity remains a leading area of strength at Purdue, rising two places to seventh, along with software engineering, ranked 10th. Artificial intelligence moves up five places to 19th, and data analytics is ranked for the first time, at 13th, along with programming and computing systems.

Patrick Wolfe, Purdue’s Frederick L. Hovde Dean of Science and Miller Family Professor of Statistics and Computer Science, said, “We are enormously proud of having generated so much sustained momentum across the data and computational sciences at Purdue — and even more so to have done this while expanding our enrollments substantially, providing opportunities for many more of the best and brightest students to join us here for their studies. Our continued progress is a reflection not only of major strategic investments we’ve made and continue to make but also, even more strongly, the exceptional efforts of our faculty, staff, and proud alums.”

The School of Management is 30th among business schools, with its production/operations management program at No. 9 and supply chain management/logistics at 12. Analytics is 17th, management 30th, and finance 36th.

In nursing, Purdue gained eight spots to No. 112. In other rankings, Purdue is No. 26 in best schools for veterans and 46th in undergrad research. Purdue Global is listed as among the best for economic diversity.