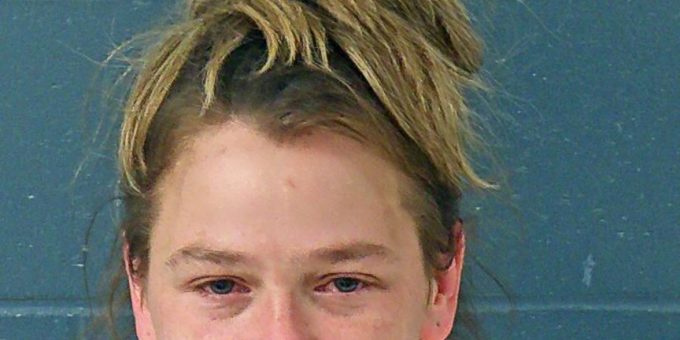 BEDFORD – A Bedford woman was arrested on Thursday, September 8th after Bedford Police officers were called at 11:52 p.m. to respond to the police department.

A male told police he had been assaulted.

The male told police that 34-year-old Amanda Pelfree had been drinking for the “majority of the evening” and when she drinks “she has a tendency to become argumentative and even violent at times”.

The man said there was no issue until her boyfriend had called Pelfree. The boyfriend is currently incarcerated.

After the phone call ended, she became argumentative. She was angry because the male victim had bought concert tickets but had not purchased her boyfriend one. He told her he didn’t buy the boyfriend a ticket because he was in jail and didn’t think he would be released in time to attend the concert.

Pelfree then told the victim she wanted steak for dinner, but when he told her there were no restaurants open that had steak available, Pelfree became “more angry”.

The male victim said Pelfree then called “Grubhub” to deliver food to her, however, Grubhub was unavailable.

She then asked the victim to take her to Taco Bell, but he refused.

That is when Pelfree punched him in the mouth with a closed fist causing a cut on the inside of his mouth.

She then proceeded to hit him six or seven times with her cell phone on the top of his head, his ear, and his neck.

Pelfree also grabbed a knife and began pointing it in his direction. He was able to grab that knife and place it out of her reach. She then grabbed a second knife and as he exited the room, Pelfree stabbed him.

The male victim was able to grab the second knife from her and threw it out of Pelfree’s reach.

When the male victim attempted to flee the home, Pelfree followed him and pushed him causing him to fall to the ground. When the male rolled over onto his back, she began kicking him in the face causing his nose to bleed and then kicked him a second time near his collar bone.

The male victim eventually was able to flee and went directly to the police department.

Officers photographed the male victim’s injuries and he was evaluated by an IU LifeLine ambulance crew but refused further medical attention.

While the victim was being treated, officers went to the home at 425 N Street. It was at that time Pelfree was detained. She denied injuring the male. Officers searched the home and found the knife that the victim had thrown.