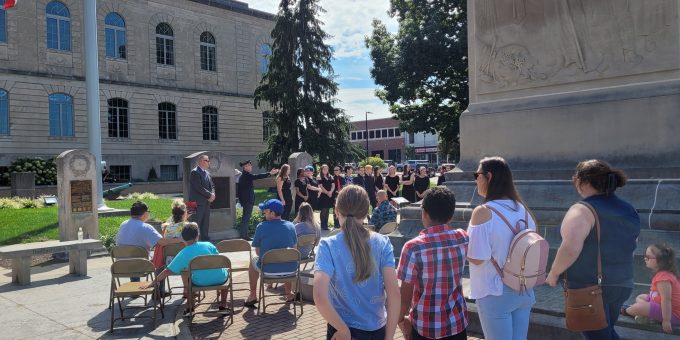 BEDFORD – Veterans and First Responders were honored during the 2022 Festival for Heroes at the Lawrence County Courthouse Saturday afternoon, for their dedication and efforts made during the September 11th attacks in 2001.

Lawrence County Veterans Affairs Officer, Brad Bough, addressed those in attendance, recognizing the efforts made for those who laid their lives on the line for the safety of the nation.

“While those in the military were overseas, the first responders were here, in the United States, in Indiana, protecting our families from danger when we weren’t able to. It is important to remember them for all they have done and continue to do while our military is working abroad,” said Bough.

Bedford Mayor, Sam Craig, then addressed the crowd to share the selflessness represented during those events, and even today to protect their communities.

“I’m sure everyone remembers where they were on 9/11, I still get chills thinking about what happened that day when 2,977 lives were tragically lost,” said Mayor Craig. “They were family, friends, and neighbors, and I am honored to be speaking today in regards to these men and women, to remember them and those who selflessly laid their lives on the line for their community. They’re here to serve, they are called to do this, and they do it.”

The event also saw two wreaths laid, one to honor the memories of Veterans and the other for first responders who lost their lives in the line of duty, presented by Bonnie Johnson, widow of U.S. Navy Veteran and retired Bedford Police K-9Officer Michael Johnson, her daughter Michelle, and Karen Day.

Following this, BNL Music Director Luke Hayden sang “Some Gave All” by Billy Ray Cyrus, with the line “All gave some, some gave all, some stood through the red, white, and blue, and some had to fall” echoing through the air, setting the tone for the event.