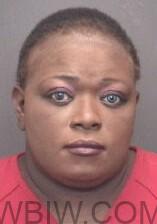 EVANSVILLE — An Evansville woman who worked at Walmart has been arrested after stealing thousands of dollars from the store where she worked.

Moredock told police that her job as Front End Lead included taking money to and from the self-checkout registers.

Evansville detectives say Walmart provided them with 13 store surveillance videos between April 20, 2022, and May 17, 2022, showing Moredock taking cash out of machines, placing it in her pocket or a shopping bag, and then leaving the store.

A store loss prevention officer told investigators that Moredock may have stolen more than $225,000 over a two-year period.