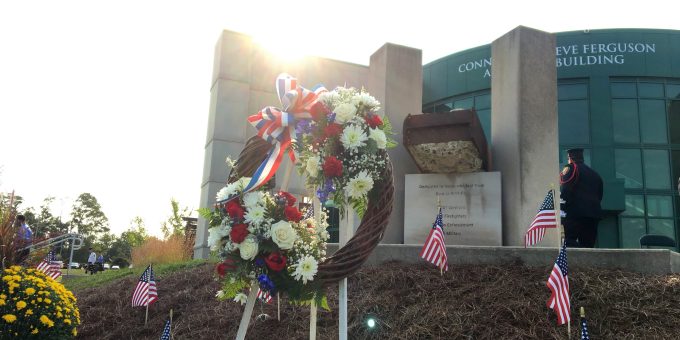 BLOOMINGTON – Ivy Tech Community College’s Bloomington campus will host a 9/11 Remembrance Ceremony Sunday, September 11, 2022, at 9 a.m., in coordination with the City of Bloomington and Bloomington Metropolitan Fire Fighters Union Local 586. The event is open to the public and the community is invited to attend. It will be held outdoors at Ivy Tech’s Cook Pavilion entrance with limited seating available. The rain location is inside Shreve Hall.

The City of Bloomington’s beam from the structure of the World Trade Center is on permanent display in a 9/11 Memorial on Ivy Tech’s campus, in front of the Cook Pavilion. The late Captain Robert Loviscek, of the Fire Fighters Union Local 586, personally traveled to New York City and brought the beam from the structure of the fallen World Trade Center back to Bloomington.

“This year, we carry on paying respect and honoring the memories of those who were killed that day and the sacrifices that were made in memory of Captain Bob Loviscek,” said Chancellor Jennie Vaughan.

A tree dedication will take place in honor of the late Captain Loviscek, who passed away in July.

Ivy Tech’s Cook Pavilion entrance is on the northwest side of the building, located at 200 Daniels Way on the west side of Bloomington.

Ivy Tech Community College offers more than 70 career and four-year transfer programs, with courses that start multiple times per year for quick entry and graduation. To get started, apply for free online at ivytech.edu, call 812-330-6013, or email askBloomington@ivytech.edu. For information on tuition-free programs at Ivy Tech Bloomington, visit ivytech.edu/bloomington/NLJ.

Ivy Tech Community College (ivytech.edu) is Indiana’s largest public postsecondary institution and the nation’s largest singly accredited statewide community college system, accredited by the Higher Learning Commission. Ivy Tech has campuses throughout Indiana and also serves thousands of students annually online. It serves as the state’s engine of workforce development, offering associate degrees, short-term certificate programs, industry certifications, and training that aligns to the needs of the community. The College provides seamless transfer to other colleges and universities in Indiana, as well as out of state, for a more affordable route to a Bachelor’s degree. Follow Ivy Tech on Facebook, Twitter, Instagram, and LinkedIn.