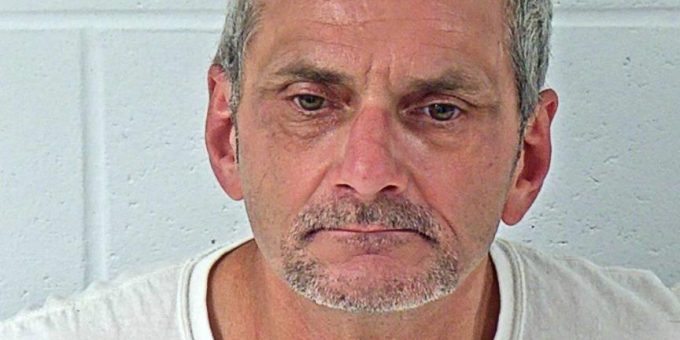 MITCHELL – A Mitchell man was arrested after he used a device to interfere with a drug and alcohol test at the Lawrence County Probation Department.

According to a probable cause affidavit, on Thursday, September 1,  at 2:17 p.m. officers were called to the probation department after 59-year-old Kim Blevins, was accused of possessing a device used to alter a drug screen. Blevins was currently on probation and ordered to submit to urine drug screens. When he entered the bathroom to do the test the probation officer said Blevins appeared nervous and was “quickly rambling about several things”.

He then asked the probation officer to turn on the water in the sink. The officer did not turn the water on.

After giving Blevins the urine drug screen cup he “awkwardly hovered over the urinal at which time this officer observed and heard a lot of unusual movement and sounds”.  The officer then noticed something in Blevins’ hand. But Blevins denied the accusation. He then told the officer he could not provide a urine sample and needed to get back to work.

He was instructed to drink water from the water fountain and to inform the office when he was ready to try again.

A few minutes later,  Blevins stated he was ready. He was then given a urine cup with a tamper-proof handle attached and was instructed to hold the cup by the handle in his right hand and place his left hand on the wall.

Blevins attempted several times to use his left hand to retrieve his synthetic urine device and was again told to put his left hand on the wall.

He then stated again he could not provide a urine sample.

Blevin then asked to speak to the officer in private. They entered the officer’s office and Blevins admitted to using meth. The officer then asked Blevins to remove any device he may have on his person. In his pants was a small glass jar taped to his body. The jar had urine in it that was not Blevins.

Blevins was arrested on a charge of possession of a device or substance to interfere with a drug or alcohol test.

Blevins told the probation officer he was not confident he would pass his drug screen, so he brought the urine with him to use for the test.