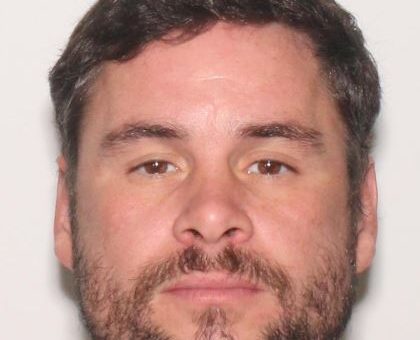 JACKSON CO. – Thousand of dollars worth of stolen property has been returned to its rightful owner and a Seymour man has been arrested.

According to the probable cause affidavit, the investigation began on August 31 when deputies were advised of a suspicious male driving around the area of the 7400 block of East County Road 50 North on a four-wheeler. Officers soon observed a green/black four-wheeler with a metallic object attached to the front. Aboard it was a male matching the caller’s description.

When the man looked at a deputy, the officer immediately recognized him as Sean Moffatt from prior dealings. As the deputy turned his vehicle around, Moffatt took off.

The officer parked his vehicle and walked toward the wooded area where he had first seen Moffatt. As he entered the field, he saw the four-wheeler with keys in the ignition. However, Moffatt was nowhere to be found.

According to Sheriff Meyer, the four-wheeler, originally green, had been spray-painted black. Officers were able to determine that it matched the description of one stolen from the 7000 block of East County Road 50 North on July 5, 2022. The owner was called to the scene and was able to identify the vehicle.

The man told police when the four-wheeler was stolen, it had a 40-ton log splitter attached. A search warrant for the property where Moffatt was known to reside was executed.

At the property, officers located the log splitter. Also inside the home, they found items believed to have been stolen from previous burglaries, including clothing, alcohol, two neon signs, two unopened Amazon packages, fishing poles, a fish finder, a remote to a trolling motor, and keys to a boat that had been stolen.

These items were positively identified by other theft victims.

Sheriff Meyer noted the property that was returned to owners was from theft cases dating as far back as September 2021.

On Thursday, September 1, the Sheriff’s Department received information that Moffatt was inside his residence in the 300 block of North State Road 11. Officers set up a perimeter around the residence. When deputies knocked on the front door, Moffatt ran out the back straight to waiting officers. He was taken into custody without incident.

“I am proud of the effort the officers put forth in this case,” said Sheriff Meyer. “My department is dedicated to keeping our residents and their property safe and working to hold those who violate the law accountable.”