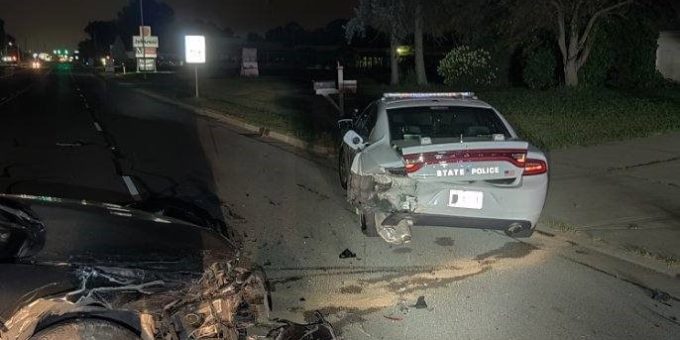 HOBART – For the 4th time in the last 6 months, a trooper assigned to the Lowell Post has been struck by an alleged impaired driver.

Sunday, at approximately 3:40 a.m., Trooper Ryan Parent performed a traffic stop on Ridge Road west of County Line Road in Hobart.  While Trp. Parent was seated in his patrol car with all emergency lights activated, and his fully marked Dodge Charger police car was struck by a black, 2008, Pontiac Grand Prix.

This impact pushed the police car into the vehicle that had been pulled over, a white, 2010 Lexus.

The Lexus sustained minor damage and the driver was not injured.

While at the scene of the crash, officers made observations that led them to believe that alcoholic beverages and/or illegal substances had been consumed by Cabello.  A warrant for a blood draw was requested by Trooper Kevin Council and later issued by a Lake County Court Judge.

The results of that blood draw are currently pending.

Cabello was later released to the custody of Trp. Council and transported to the Lake County Jail for processing.  Cabello is facing preliminary charges of operating a vehicle while intoxicated with a prior conviction, OWI Endangerment, OWI, possession of marijuana, and possession of drug paraphernalia.

The Indiana State Police would like to remind drivers that consume alcoholic beverages, that there are options available instead of driving impaired.  Ride-sharing, such as Lyft or Uber, calling a friend for a ride, or designating a sober driver is responsible way of not putting yourself and others in jeopardy by driving after consuming alcoholic beverages.