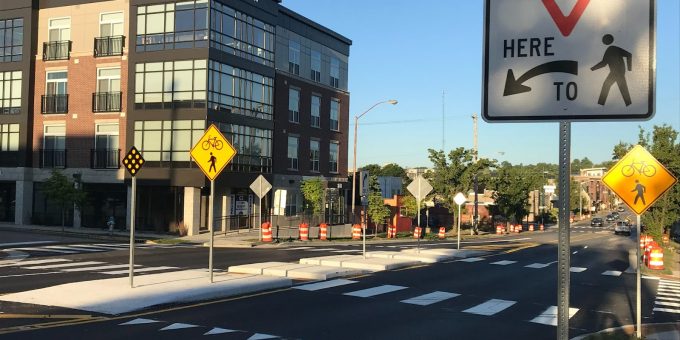 Contractors have removed 60′ in stacked bricks from the Johnson Creamery smokestack. Parks and Recreation has removed the fencing across the B-Line Trail between 7th and 8th Streets to re-open the trail, which has been closed since January as a safety measure. The temporary orange barricades marking the B-Line Trail detour through the City Hall parking lot have also been removed.

Late last year the smokestack was determined to be potentially dangerous and early this year City staff issued an unsafe order. A portion of the B-Line trail adjacent to the smokestack was closed as a public safety measure. The Bloomington City Council and Historic Preservation Commission worked with the property owner to find a solution that respected the historic site, and Bloomington history, while prioritizing public safety. The resulting decision was to preserve the smokestack at a lower height. The smokestack still stands as a reminder of Bloomington’s history and the B-Line trail around it can once again be enjoyed fully and safely.

The two-year downtown stormwater infrastructure reconstruction project to address flooding during rain events continues. Contractor Milestone is completing the new culvert under Grant St between Kirkwood and 4th and into the alley south of Grant.

Grant continues to be closed from 4th to Kirkwood. The alley on the east side of Grant, between Trinity Church and Longfei Restaurant, will remain closed.

The City will continue to coordinate with other construction and road projects as they reconstruct 1,829 feet of culverts to protect downtown area residential and commercial buildings. This project is on track to be finished by the February 2023 deadline. For more information about the project visit: bloomington.in.gov/utilities/hidden-river.

Businesses on 4th and Grant are still open as this project continues around them. They welcome customers and taking the time to visit them may afford residents an opportunity to see what’s happening with this project. Businesses in the impacted area include The Venue, Siam House, Little Tibet, Burma Garden, Korea Restaurant, Oak, My Thai, DO Asian Fusion, Dat’s, B-Town Gyros, Healthy Hoosiers, Bali Cafe, Storm Real Estate, Longfei, Parlor Donuts, Soma Coffeehouse, and Taste of India.

Paving on Saratoga in Park Ridge East is complete. Crews milled W 13th Street from Illinois to Summit this week and are currently paving it. Next week, crews will mill and pave W 12th from Illinois to Monroe.

The landscape along 2nd Street has changed significantly with the removal of six structures along the south side of the roadway. The demolition of the large warehouse at 640 Morton Street will continue into next week. Demolition activities will then move to the warehouse at 635 Rogers Street. Material haul off will continue for the next few weeks for disposal and recycling. The below photo shows the continued demolition of the 640 Morton Street warehouse.

The Hopewell Phase 1 East project site is bounded by 2nd Street to the north, 1st Street to the south, B-Line to the east, and Rogers Street to the west. Additional information about the project and the contractor can be found at the following links: https://bton.in/mRp~I, hopewellbloomington.org & renascentinc.com

Due to the current demolition phase of the Indiana University Poplars Building on 7th Street, west of campus, N Grant Street will be closed between E 6th and E 7th from September 6th to September 20th. The sidewalks adjacent to the building will also be closed during each of these closures. Closures will be 24 hours a day.

The City’s crosswalk improvement project at the intersections of 3rd and Grant Street, 11th Street and Blair Avenue, and Patterson and Isaac Drive has reached substantial completion. Improvements include marked crosswalks, accessible curb ramps, warning signs, flashing beacons, a median refuge island, curb bulb-outs, and other traffic calming features. Pavement Marking installation is in progress at all three intersections this week, and residents may encounter temporary traffic control at each intersection. Additional information about this project can be found at bloomington.in.gov/engineering/projects/crosswalks.