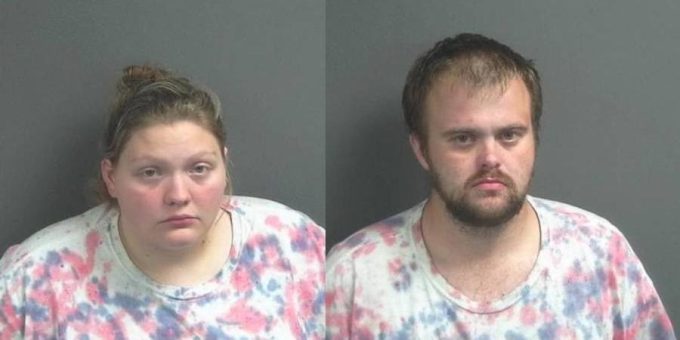 CONNERSVILLE — A Connersville couple was arrested on charges of battery and neglect of a dependent after police say they injured their 2-month-old baby.

The investigation began after Brittany and Michael Mengedoht took their infant to Reid Health Hospital emergency room on August 24, 2022.

According to hospital records, the couple said they were concerned because they found blood in their infant boy’s diaper.

A doctor evaluated the baby and told police as soon as he entered the room he immediately noticed the baby had bruising and abrasion across his entire forehead. The doctor then found two broken femurs, a broken arm, several broken ribs, burn marks on his face, along with bruising and a laceration around his anus. The broken bones were in various stages of healing. The doctor also reported he believed the baby suffered from shaken baby syndrome.

The baby was transfered to Riley Hospital for Children and is listed in critical condition.

After arriving at Riley, the baby suffered several seizures and had to be intubated. The baby also tested positive for meth and marijuana.

According to police Brittany Mengedoht said the bruising was the result of a spider bite and the abrasions were from the boy rubbing his face on clothes and from the car seat.

The officer while at the hospital reported he witnessed Brittany Megedoht forcefully grab the baby’s leg to lift him from the bed to remove his diaper. The doctor reportedly reminded Brittany Megedoht to be gentle with the baby since X-rays showed fractures in the child’s legs.

The couple told the officer they were the sole caretakers for the baby and he is never left with a babysitter or at a daycare.

According to court papers, both individuals were interviewed separately and could not explain how the child was injured.

Michael Mengedoht told investigators the baby was never dropped and did not fall. He said the only time he injured the child was when he accidentally dropped a cell hone on his face.

Brittany and Michael Mengedoht were arrested on charges of battery causing serious bodily injury to person under the age of 14 and neglect of an infant resulting in serious injury.