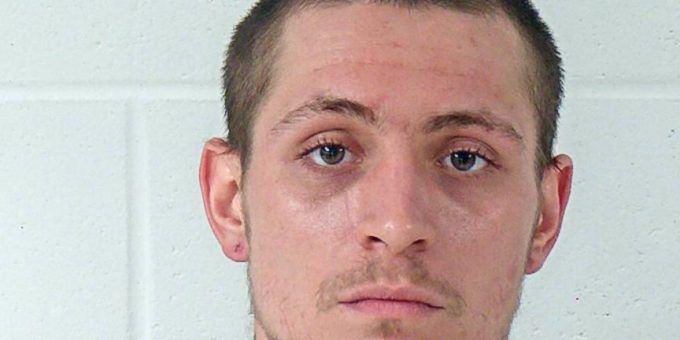 One of the passengers was 24-year-old Jordan Pence, who had his hands down next to his legs. He was told to keep his hands up so the officer could see them.

The female driver was told to exit the vehicle. She said she had just been stopped by the Orleans police department to warn them about the fictitious license plate.

The woman told police her boyfriend was sitting in the front seat and his two friends were in the back seat, including Pence and 40-year-old Nicholas Stroud, of Indianapolis.

The officer noted in his report that the female driver appeared nervous.

She was then asked if there was anything illegal in the vehicle.

She said, “there shouldn’t be but I can’t speak for them”.

The passengers were asked to step out of the vehicle. After Canine Koah alerted officers to possible drugs in the vehicle, the driver granted police consent to search the vehicle.

Under the back passenger seat, the officer found a small plastic baggie of crystal meth.

Pence was arrested on a charge of possession of meth.

While speaking to Stroud the officer noticed a syringe filled with 2 grams of meth had fallen out of Stroud’s waistband.

He was then asked if he dealt meth and he replied “he was stupid”.

The officer then asked permission to look at Stroud’s phone and found numerous messages about drug transactions.