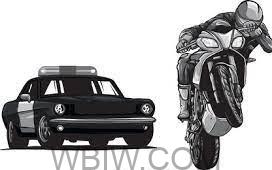 DAVIESS CO. – A Vincennes man is in jail after leading Daviess County Sheriff’s Department deputies on a high speed chase through northeastern Daviess County. Deputies identified the driver of the motorcycle as 54-year-old Stephen Hart of Vincennes.

The Daviess County Sheriff’s Department reports the chase began at 12:27 a.m. Tuesday when a deputy attempted to make a traffic stop near the intersection of Main Street and US 50 in Montgomery.

Five deputies joined in the chase, which lasted around 12 minutes and covered more than 10 miles.

Deputies measured more than 95 feet of skid marks at the scene.

Hart was taken by ambulance to Good Samaritan Hospital with leg, back, ankle, and head pain.

According to Daviess County Sheriff Gary Allison, Hart suffered no significant injuries and was transported to jail after deputies found several different drugs on Hart, including just under 200 grams of methamphetamine, some marijuana, and pills.