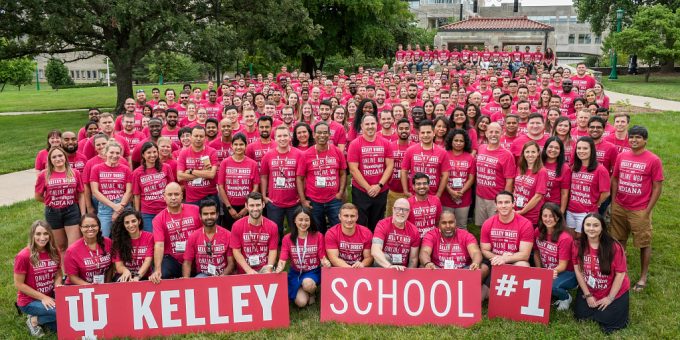 BLOOMINGTON – Ranked as the number one online MBA curriculum, the Kelley Direct Online MBA program is unique because of the hybrid model offered to its students. As an intensive introduction to the program, students travel to the Kelley School of Business on the Indiana University Bloomington campus to participate in several in-person events, including a strategy blitz competition.

During the Kelley on Campus strategy blitz, students are presented with a real-world issue from a partnering business or organization. They work in teams to formulate solutions and present cases in a competitive format.

“Students value this experience because it allows them to learn and apply concepts in a real-world setting where they can make an impact,” said Regan Stevenson, assistant professor of entrepreneurship at the Kelley School of Business and one of the strategy blitz faculty coordinators. “Clients love the program because they get fresh eyes on their most important strategic challenges.”

“It is a problem-solving process condensed into an intense and engaging educational design,” said Tim Baldwin, Randall L. Tobias Chair in Leadership at the Kelley School of Business. “It’s a very powerful way to bring people together in a short period of time and equip them to make really good recommendations.”

Eli Lilly, Marcus Theaters, Cummins, and Post Cereal are among past organizations that have participated. This year, students collaborated with the Boys and Girls Clubs of Bloomington, a local chapter of the national nonprofit organization.

Baldwin coached basketball at the Boys and Girls Clubs of Bloomington in the 1980s, and in 2020 he joined the board of directors. He said that is when he witnessed the impact the club makes on the community.

“I learned that they are providing food and childcare services to the point that they felt an absolute necessity to stay open when the schools closed in 2020,” Baldwin said. “We serve about 400 to 500 kids with potential for roughly 600 or 700 in the existing facilities. The need is probably three times that in the community. We’re looking at really changing the trajectory of kids’ lives — trying to find more accessible career paths to get these kids out of a cycle of poverty.”

The students were asked to build an initiative based on one of four pillars in the Boys and Girls Clubs of Bloomington strategic plan: growth, programming, fundraising, and safety. The teams met with club employees and board members to learn about the challenges the organization encounters, such as member retention.

“One thing everybody noticed was there was disengagement within the club members between the ages of 14 to 18,” said Ashish Parbatani, a scientist at Lam Research who is in his first year as a Kelley Direct Online MBA student.

“There are two big golf courses and country clubs around IU, and they’re not doing any caddy programs,” Parbatani said. “Some of the (Boys and Girls Club) board members are actually powerful members of these clubs, so why not leverage those relationships and start some kind of caddy program to not only give kids a good way to make income but also expose them to these really good mentors?”

Parbatani said that the strategy blitz experience was both educational and energizing. Already equipped with a Ph.D. in nanoscience, he was drawn toward the online MBA program because he is developing a new biomedical testing device that he hopes to market. He and several of his fellow students see the value in networking opportunities and mentorship offered through Kelley.

“For me, it’s the reputation and mentors at Kelley,” said Kiearrah Lawrence, a second-year MBA student who works in finance and accounting at AbbVie Inc., a biopharma company headquartered in Chicago. “A few of my mentors are Kelley grads and they have an extremely solid reputation.”

Lawrence said AbbVie hires many IU grads, and she has always enjoyed working with them. She went into the Kelley on Campus event prepared for an intensive yet rewarding experience. Many of the issues her team problem-solved for the Boys and Girls Clubs of Bloomington were applicable to other nonprofits she partners with at Abbvie.

“The case was fantastic,” Lawrence said. “I have a soft spot for nonprofit organizations through some of the work that I do at Abbvie. I lead our African American employee resource group called The Black Business Network.”

Lawrence’s team presented an idea to create a junior board of directors for the Boys and Girls Clubs of Bloomington, so teens could take some ownership and feel a sense of agency.

“The kids in that age group would be paired with a board member as a mentor,” Lawrence said. “Each junior board member would have a committee, and they’re responsible for putting on their own programming or events.”

In addition to simulating a realistic example of collaborative strategy, the teamwork element of the blitz offered students the opportunity to network.

“Students get to network in person with their online peers from around the country,” Stevenson said. “Our students are extraordinary and come from all walks of life. For example, during the last strategy blitz, I interacted with a team composed of a musician from Georgia, a rocket scientist from New England, and a startup technologist from Silicon Valley, all taking their first business course together. Teaching in this program is so much fun because the students are hungry to learn and have diverse perspectives that they bring into the classroom.”

By the end of the strategy blitz, many students shared they felt a boost of confidence and renewed energy, and the in-person element of the program was incredibly valuable.

“It was important to me to find a program that was online but also had an in-person component, and only a few programs really had that hybrid mixture,” said Isaiah Harris, a New Yorker who is earning his MBA while working as a senior associate of investor relations at Blue Meridian Partners, an impact investment organization funding scalable solutions to various social problems.

“If I could use adjectives to describe the on-campus experience, they would be engaged, dynamic, helpful, and thoughtful, just to name a few,” Harris said. “Once it was time to come back to the quote/unquote real world, I was already thinking about ways to apply what I’ve learned and leverage connections that I made through networking.”

Harris said the case was challenging since it was for a nonprofit, but he and his fellow students welcomed the opportunity.

“Nonprofits have business issues, even if they’re not a business in the way of making money,” Harris said. “They still have business operations and challenges just like any for-profit. We had to figure out how can we increase revenue without selling something, per se, or without having a big budget or staffing capacities that a larger for-profit organization may have.”

Harris’s team decided to present a web platform called “Clubs Connect” to meet young people where they are — on social media and social applications. The platform would pair them with online counselors to help with career advice, homework, and tutoring.

Baldwin said there were so many great ideas generated by students during Kelley on Campus, he would not be surprised if ideas from several teams are implemented at the Bloomington Boys and Girls Clubs.

“I think one of the greatest signals of project success would be to see ideas generated from this program become best practices in the national Boys and Girls Clubs of America,” Baldwin said. “Overall, it was a wonderful synthesis of bright and capable MBA students, attracted by a world-class business school, using their business lessons and acumen to generate fresh ideas for a local nonprofit. It was a win-win in every way.”

Information: by Julia Hodson at News at IU Bloomington.