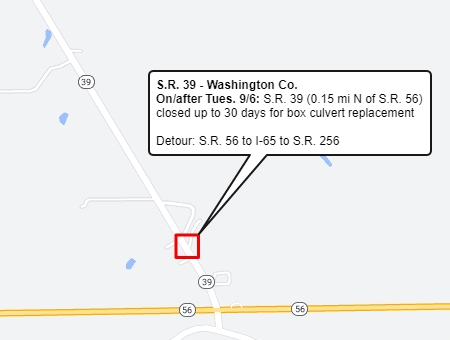 WASHINGTON CO .— Indiana Department of Transportation contractor Dave O’Mara Contractor Inc. plans to close State Road 39 for up to 30 days starting on or after Tuesday, September 6, for a box culvert replacement project in Washington County.

Contractors will be working just north of S.R. 56 near Little York.

Traffic will be detoured along S.R. 56, I-65, and S.R. 256. The $1.3 million contract was awarded to Dave O’Mara in January and also includes a structure replacement project on S.R. 56, located 1.75 miles east of S.R. 39, that is currently scheduled to begin later this year in Scott County.

INDOT reminds drivers to slow down, use caution and remain vigilant of workers and equipment in active construction zones. All work is weather-dependent and schedules are subject to change.