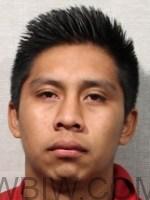 SEYMOUR – A Seymour man was arrested after being accused of having a sexual relationship with a teenager.

According to Seymour Police, investigators began investigating the incident in February.

Police say then 20-year-old Juan Pascal-Gaspar was having a sexual relationship with a then 14-year-old girl.

They could not locate Pascal-Gaspar until they received a tip last week on his location. Police then interviewed Pascal-Gaspar. During that interview, Pascal-Gaspar admitted to having sex with the teen on at least two occasions.

He was then arrested on two counts of sexual misconduct with a minor.