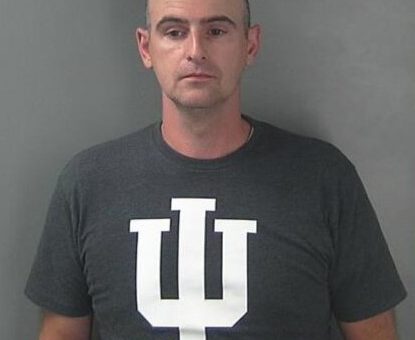 BLOOMINGTON – A probable cause affidavit filed in Monroe County Circuit Court 9 in the case against Indiana State detective Daniel Crozier started after Crozier has a strange conversation with a coworker.

Crozier was arrested on felony charges of theft of a firearm and official misconduct.

An evidence specialist at the Indiana State Police Bloomington Post reported a strange conversation with Crozier.

Feeling uncomfortable, about the discussion, court documents say the specialist lied to Crozier, saying the guns were tracked in the computer, counted, and inspected prior to transport and that they were checked during audits. The specialist told investigators Crozier continued to ask questions. Crozier then said he had to leave and go home to take care of his dog. But during the investigation, Crozier told detectives he needed to go home to check on his daughter.

Crozier came back in about an hour later and parked in front of the evidence barn where the weapons are stored. The technician told detectives he asked Crozier what he needed and he drove off. Crozier then stopped and asked if the alarm was set, which the technician said it’s always set.

Crozier told the specialist that he needed two gun boxes and had to deactivate the alarm to get them. However, those gun boxes were inside the ISP post for all troopers to use.

Detectives reviewed security footage and found Crozier parked his truck directly in front of the evidence barn on two occasions. The way he parked, partially blocked the views of the two security cameras.

On the first occasion, according to court documents, Crozier is seen on the video footage entering the evidence barn and then carrying something out in a brown paper bag. He is then seen putting that bag under the front seat of his truck. He then grabbed something and went back into the barn. He then exited the barn and closed and locked the door.

A warrant was issued for Crozier’s arrest on August 24th. On August 25th he posted a $2,500 bond and was released from jail. Crozier is being represented by Joseph Lozano and Crozier’s initial hearing was waived. Crozier was placed on electronic monitoring. A pretrial conference is scheduled for September 28th at 2 p.m. before Judge Mary Ellen Diekhoff.