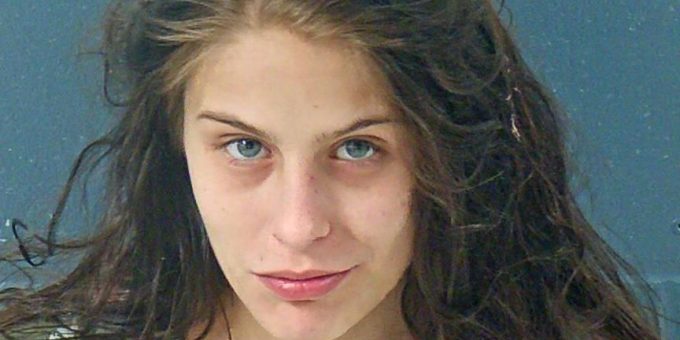 MITCHELL – A Bedford teen was arrested early Sunday morning when Lawrence County Sheriff’s Department deputies responded to 1335 Meridian Road after a report of a physical altercation between two females.

While en route to the residence, Lawrence County Central Dispatch informed officers the residents had locked confrontational, 18-year-old Mariah Lamm outside of the house. Lamm was breaking windows and attempting to enter the residence.

When officers arrived they found a woman yelling at Lamm in the yard. She told police Lamm had broken her windows and she wanted her gone.

Police say Lamm had locked herself inside an enclosure on the property. The enclosure had no roof and was made of fence approximately 4-5 feet in height. Lamm was attempting to climb out of the enclosure, while simultaneously yelling at the woman in the yard and telling her she was going to fight her.

Lamm was uncooperative with the police while they attempted to detain her. It was at that time, that officers noticed Lamm was bleeding from multiple places on her body and had two bloody knees.

Officers has to lift Lamm off the ground and carry her to the vehicle because she refused to walk on her own as she was being escorted.

Officers briefly struggled to place Lamm into the police vehicle due to her continued resistance. Officers placed Lamm in leg shackles to prevent her from damaging the vehicle or injuring herself.

Lamm continued to scream incoherently while officers attempted to question her.

While en route to the hospital, Lamm told the officer “she would provide the officer with her brother’s internal organs in order for him to release her from custody on the side of State Road 37”.

While at the hospital, officers had to hold Lamm down on the hospital bed in order for hospital staff to evaluate her.

She continued to resist officers as well as hospital staff by standing on the bed. She also used her feet to kick both officers while they attempted to restrain her.

Lamm was medically cleared and transported to jail on charges of illegal consumption, criminal mischief, minor in possession of alcohol, resisting arrest, and battery on public safety officers.

While at the jail, Lamm continued to be uncooperative and combative.