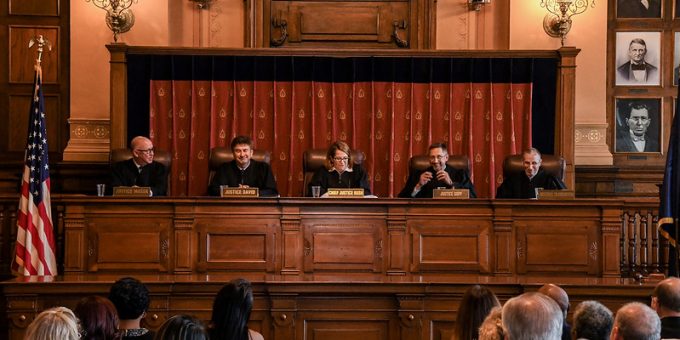 The oral argument will be held at the Mitchell Opera House and then the justices will attend a luncheon at Millstone Dining Room at Spring Mill Inn.

Oral arguments in a particular case focus on the legal issues surrounding the controversy between the parties, and are usually presented after the case has been fully “briefed”. Oral arguments usually focus on the finer points of each side’s case and usually require each lawyer to prepare for tens or hundreds of hours to be ready for any question he or she might encounter.  The questions are largely based on what is written in the briefs, but no one knows ahead of time the exact questions that will be asked.  Each justice will have the opportunity to ask questions of each lawyer for each respective side, and each side has a time limit in presenting his or her case.

The judges usually entertain audience questions about the law and the judiciary in general, but not about the case they’ve just heard.

The details of the case will not be known until shortly before oral arguments are held.

Cases for traveling oral argument are actual cases pending before the Indiana Supreme Court, and the justices will likely take their questions and answers under advisement until several weeks later when a decision will be rendered and published.

More details about the event will be released closer to the date.

The Lawrence County Public Defenders Office is now located at Plaza Courthouse and the remodeling will be completed by the end of the month, Chief Public Defender Tim Sledd reported to the commissioners Tuesday morning.

“The new reception window had been installed,” added Sledd. “We still need to do some door framework. In the future, I will be requesting to remove a wall and expand the conference meeting area to hold more than one deposition at a time.”

Sledd said the move has made a huge improvement with attorneys meeting with inmates being housed in jail and those who need to report to the public defender’s officer from courts which are located within the same building and across the street.

“When we’re at Dunn Plaza it sometimes took days for a clinic to come in and make contact. Now we are in the same buildings as the court and they just have to walk upstairs,” added Sledd.

Cameras were also installed as an added security measure.

As agency chief, Sledd oversees the staff of defense attorneys, monitors caseloads, meets reporting requirements of the Indiana Public Defender Commission, and prepares an annual budget. For 2022, the agency has a budget of nearly $900,000.