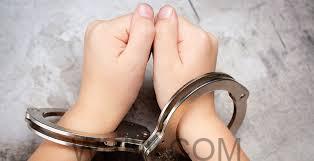 BEDFORD – Two teens were arrested Thursday after Bedford Police officers received a report of a male teen attempting to enter a home in the 1700 block of Linwood Drive.

The male teen was related to the home occupant.

The caller told police the teens had stolen a truck in Mitchell with a Texas license plates and they were now demanding her car.

The teens demanded the woman’s car keys and one pointed a black semi-automatic handgun at her, aimed at her foot.

Prior to the officers arrival, the two teens fled the home.

An officer recovered a handgun magazine from the garage doorway inside the home that one of the teens had thrown.

Officers checked the surrounding area and found the reported stolen truck parked on Linwood Drive near the intersection of Windwood Drive, unoccupied.

Once arrived on the scene, Bedford canine Zazu tracked the juveniles to the area of J Hunter Drive and then to the Milwaukee Trail.

Officers searched the east side of the trail by Parkview Schools, the National Guard Armory, and the Limestone Boys & Girls Club. While in the area of the club, two males and a dog were spotted walking toward the club’s parking lot and baseball field. Both teens ran through the baseball field when they spotted an officer. That officer ordered them to stop. During the chase, one teen stopped and threw a black object. Both teens eventually stopped running and dropped to their knees.

Officers were able to detain both teens without incident. One of the teen suspects stated, “the gun is over there”. The gun was found a few feet from where the teens had stopped. The gun was loaded but did not have a bullet in the chamber.

One teen was 12 years old and the other was 14 years old. The 14-year-old male told the officer “he was responsible for everything and the other teen had nothing to do with anything”. Another officer arrived on the scene and the two teens were escorted to police vehicles and transported to the Bedford Police Department.

The truck on Linwood Drive was confirmed to be stolen from Lehigh in Mitchell. The Lawrence County Sheriff’s Department is investigating the theft of the stolen truck. A gun case was found in the truck that matched the gun officers recovered.

Legal guardians for both teen suspects were contacted and requested to report to the Bedford Police Department.  Each teen suspect provided statements to the police after they spoke with their legal guardians.

The 12-year-old teen was issued a summons to appear in court on a charge of criminal trespassing and released to a family member. The 14-years-old boy faces charges of attempted carjacking, auto theft, intimidation with a firearm, theft, pointing a firearm, and possession of a handgun by a person less than 18 years old. The 14-year-old teen was transported to a juvenile detention center by a Lawrence County Sheriff’s Department deputy.