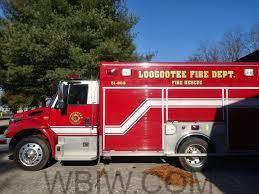 LOOGOOTEE – Loogootee Fire Department firefighters battled a fire for more than three hours Thursday at the Strange Farm at 1050 State Road 550, just outside of the Loogootee city limits.

When firefighters arrived at the scene at just after 6 p.m. an outbuilding was engulfed in flames.

The building was being remodeled to house animals.

The building was destroyed.

All remained injury free including the animals.

Firefighters says the cause of the fire was electrical in nature.