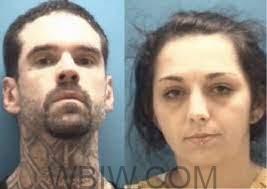 COLUMBUS — Two people were arrested Tuesday after police officers found drugs and a gun while searching a home in Columbus.

According to Columbus police, officers entered the home in the 1400 block of 7th Street to investigation a no-contact order being violated between Wicker and Harris.

While inside the home, officers noticed a glass pipe with meth residue sitting in plain sight. Officers applied for a search warrant for the home.

Once the warrant was granted, officer search the home and found a .45-caliber handgun and an estimated 100 grams of meth, a small amount of heroin, marijuana, legend drugs and drug paraphernalia.

Both Harris and Wicker were detained and transported to the Bartholomew County Jail.