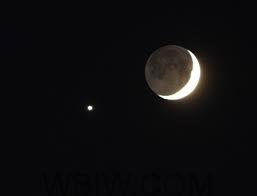 INDIANA – Early Thursday morning we will have an opportunity to catch sight of the two brightest objects in the night sky, engaged in a final pre-sunrise dance.

Set your alarm clock to ring one hour before sunrise, and then quickly head outside. Make sure you go to a site where your east-northeast sky is free of any obstructions such as buildings or trees, since what you’ll be attempting to see will be poised low above the horizon.

You’ll be looking for the brilliant planet Venus, and hovering about six and a half degrees above and slightly to its left will be a hairline crescent moon, resembling a thin smile against the twilight sky and just three percent illuminated and about two days before reaching its new phase.

Since becoming a morning fixture, this will mark the fifth time that the moon has gotten together with Venus to form an eye-catching configuration.

Unfortunately, this will be the last of such lunar get-togethers for a while. Before it vanishes out of sight for the next few months.