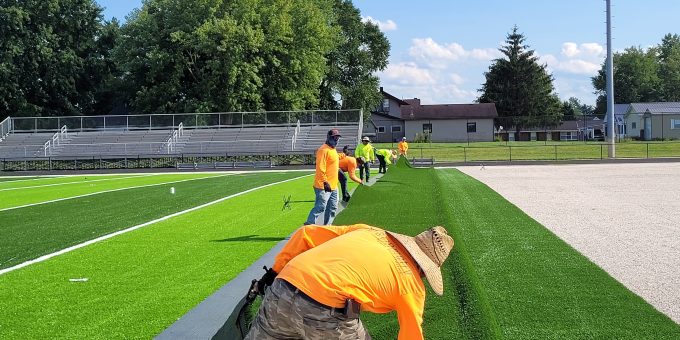 MITCHELL – The first steps in the future of Football at Mitchell High School and the Capital Project were taken, as the first sections of the artificial turf were laid down at Terry Cole Field Tuesday afternoon.

This delay had everyone at Mitchell Community Schools holding their collective breaths, as the uncertainty of when the field would be ready hung in the balance. They can now breathe a sigh of relief as plans move forward to have the first home game on September 16th against Crawford County.

“We are excited to have the crew here finally installing the turf,” said Danny Reynolds with Mitchell Community Schools. “The students and the community deserve this field to be at its best for every event that will be played on this field. Once it is complete, this will be able to house both the football team, and the boys and girls soccer teams.”

The field is being put together by the same group who installed the fields at the Minnesota Vikings, Baltimore Ravens, and the New York Jets/Giants stadiums. With this in mind, the field should turn out to be one of the better fields in Southern Indiana.

The progress on the baseball and softball fields is also underway, as all of the grass has been milled away, and the berm is being set for additional seating for fans alike to watch their teams play.

The “Hive” building is also seeing continuous progress, as brick by brick continues to be added to the structure.