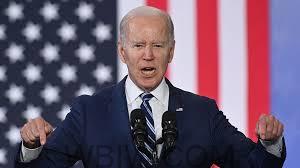 WASHINGTON – President Joe Biden announced his plan for forgiving student debt for some borrowers Wednesday, which includes forgiving $10,000 for borrowers who make less than $125,000 per year and extending the payment freeze one final time until the end of the year.

Biden added that those with undergraduate federal loans can also cap their payment at 5% of their monthly income.

The President will speak at 2:15 p.m. ET to formally announce the plan.

“In keeping with my campaign promise, my Administration is announcing a plan to give working and middle class families breathing room as they prepare to resume federal student loan payments in January 2023,” Biden said.

Biden has been facing political pressure from the left to broadly cancel student loan debt since taking office.

“President Biden isn’t ‘canceling’ debt, he’s shifting it onto everyone, including the majority of Americans who chose not to get a degree. This will make inflation worse, and we should focus on getting more value out of colleges rather than giving them another reason to hike prices,” said Senator Mike Braun.

Key Democratic lawmakers, including Senate Majority Leader Chuck Schumer and Massachusetts Sen. Elizabeth Warren, have called on Biden to cancel $50,000 per borrower. The President spoke with Schumer, Warren and Democratic Sen. Raphael Warnock of Georgia on Tuesday ahead of the expected announcement.

Biden has consistently pushed back on canceling that much, suggesting he would support wiping away $10,000 for borrowers below a certain income threshold. On the campaign trail, Biden called for immediately canceling a minimum of $10,000 in student debt per person as a response to the pandemic, as well as forgiving all undergraduate tuition-related federal student debt from two- and four-year public colleges and universities for those borrowers earning up to $125,000 a year. But he had also said he preferred Congress to take action rather than using executive power to do so.

While student debt cancellation could deliver financial relief to millions of Americans, it would shift the cost to Uncle Sam.

A one-time cancellation of $10,000 for each borrower earning at least $125,000 a year could cost the government nearly $300 billion, according to an estimate from the Penn Wharton Budget Model. Additional forgiveness for Pell grant recipients was not included in the estimate.

Plus, loan cancellation won’t address the root of the problem: college affordability. There is currently $1.6 trillion of outstanding federal student loan debt. The amount of outstanding debt would return to that level in just four years after $10,000 per borrower was canceled, according to the Committee for a Responsible Federal Budget.

Student loan cancellation also could increase inflation – though many experts say the effect would be modest, because borrowers generally pay back their student loans over time. They wouldn’t receive a lump sum of money if some of their debt is canceled. They would instead be required to pay less money each month toward their student loan payments.

“The inflationary impact its certainly positive, but I don’t think it would be much. We’re talking about a pretty small impact,” said Kent Smetters, faculty director of the Penn Wharton Budget Model.

Marc Goldwein, the senior vice president and senior policy director for the Committee for a Responsible Federal Budget — a nonpartisan group that tracks federal spending — argued against the plan in an interview with CNN’s Poppy Harlow on “Newsroom” Tuesday morning.

He believes that canceling $10,000 of debt for each borrower will likely increase inflation, undermine the stated goal of Democrats’ Inflation Reduction Act and will not significantly decrease the racial wealth gap.

“The Inflation Reduction Act saves maybe $300 billion dollars in the first 10 years. If we cancel $10,000 of debt and just extend the pause a few months, we’re going to be at about that much in terms of new cost,” he said. “All the deficit reduction will be wiped out. At the same time, we’re probably going to do more to increase inflation from debt cancellation than any inflation reduction from the Inflation Reduction Act.”

It’s also not easy to target loan forgiveness to those who need it the most and exclude borrowers with higher salaries. An income threshold that cuts off borrowers who earn more than $125,000 a year could help make sure a bigger proportion of the relief goes to low-income borrowers. But some doctors and lawyers, who will eventually be making high incomes, may also reap the benefits.

It found that one-third of the canceled dollars would go to households who earn less than $50,795 a year. A little more than half of the debt relief would go to those earning between $50,795 and $141,096.

Roughly 14% of the canceled dollars would go to households earning more than $141,096 a year.

In the meantime, Biden has taken a more targeted approach to student debt relief. Most of his efforts have been meant to expand and streamline existing federal student loan forgiveness programs.

Biden’s administration has authorized the cancellation of $32 billion so far — more than any other administration — largely for borrowers who were defrauded by their for-profit colleges and for permanently disabled borrowers.

He has also temporarily expanded the Public Service Loan Forgiveness program that forgives the debt of government and nonprofit workers after 10 years of payments, and made changes to the income-driven repayment plans, bringing millions of borrowers closer to forgiveness.

But the programs are complicated and don’t always work the way they should. A recent Government Accountability Office report found that few people have qualified for forgiveness under an income-driven repayment plan, for example. The Department of Education had approved forgiveness for a total of 157 loans as of June 1, 2021. Meanwhile about 7,700 loans in repayment may have already been eligible for forgiveness.