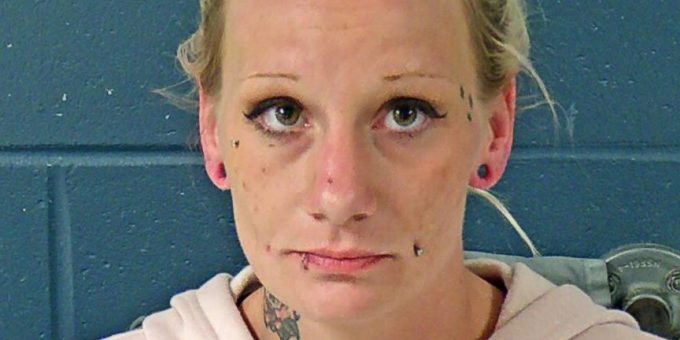 BEDFORD – A West Lafayette woman was arrested on Saturday on drug charges after a Bedford Police officer on routine patrol at 11:54 p.m. conducted a traffic stop at State Road 37 and Dixie Highway.

The officer stopped the driver of a black Mitsubishi Eclipse traveling north on State Road 37. As the officer was following behind the vehicle traveling on the overpass, the vehicle failed to maintain its lane of travel and crossed over the fog line several times. The vehicle then continued to weave back and forth within the lane on several other occasions.

The officer said the driver of the vehicle was traveling at 60 miles per hour in a 55 mile per hour posted zone. After passing the intersection of Patrick Robbins Way and State Road 37, the officer observed the vehicle once again cross the fog line and the officer overheard the sound of the tires run across the rumble strips.

The officer stopped the vehicle on State Road 37 between the intersection at Patrick Robbins Way and 16th Street.

The vehicle delayed stopping for an extended amount of time before pulling over just south of 16th Street. Before exiting the police vehicle, the officer observed that the driver, later identified as 29-year-old Ashley Soper, stuck her head out of the window to look back at the officer. The officer then noticed through the back windshield of the vehicle that Soper was making erratic movements and was acting fidgety.

A second Bedford Police officer then arrived on the scene.

Officers approached the vehicle and spoke to Soper and informed her the reason for the stop and requested her license and registration of the vehicle. During the conversation, Soper appeared to be nervous and her hands were shaking.

After retrieving all documentation, the officers requested Soper to exit the vehicle. As an officer began to issue Soper written warnings for speeding and unsafe lane movement the officer reported Soper was talkative. However, her demeanor changed and she became quiet.

Soper claimed there was not anything inside the vehicle that was illegal when asked.

Officers then asked to search the vehicle, she hesitated and then said, “probably not”.

A canine was then requested to the scene.  Lawrence County Sheriff’s Department Canine Dusty arrived on the scene and alerted officers to drugs in the vehicle.

On the rear floorboard of the vehicle officers located a metal case along with a wooden case containing marijuana, and a smoking device. A glass smoking device containing meth residue was also discovered in a bag that was in Soper’s pocket.

Soper told police the items belonged to her and not her male passenger.