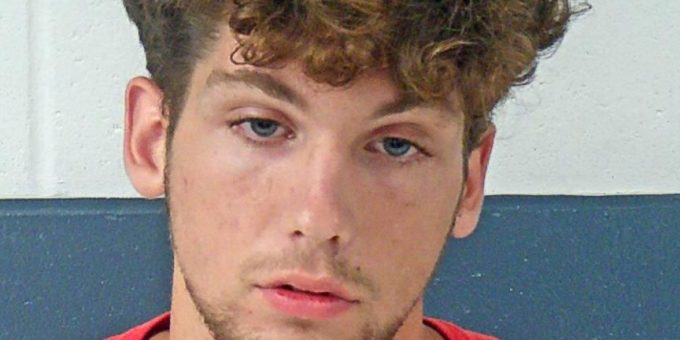 MITCHELL – A Bedford teen was arrested on Monday after Mitchell Police officers were called to a battery at 903 West Grissom Avenue at just after 4 p.m.

When officers arrived they were met by two females who were outside of the home and flagged the officers down.

As officers pulled up to the house one female was assisting a male at the doorway who was crying and had red marks on his stomach and his left arm.  Officers reported the male was holding his head.

The woman told police, 18-year-old Shane Gerkin had injured her son and then pointed to Tulip and 9th streets.

An officer traveled down the alleyway that connects the two roads and made his way to the intersection of 10th and Tulip streets. The officer found Gerkin near Tulip and 9th streets who was motioning for the officer.

As officers approached the male, he began saying “I know what I did, I already know I am  going to jail”. The male identified himself as Shane Gerkin and he was detained.

Once officers arrived back at the scene, they noticed the other male had bruising to his left eye and red scratch marks on his stomach, left arm and right eye. He also suffered red irritation to his upper left shoulder blade on his back.

An ambulance responded to the scene after the male victim reported he was dizzy. The male victim was transported to IU Health Bedford hospital for a medical evaluation.

The victim refused to make a statement against Gerkin.

A witness to the fight told police the victim and Gerkin were arguing in the victim’s room. The witness said she heard the victim say “Don’t  be talking to her like that” and she then heard  “a lot of hitting”.

The victim’s mother told police she heard “hollering and went to see what was going on”.

She then saw Gerkin punching her son. She said “it took two of us to get Gerkin off the victim”.

The mother requested Gerkin be given a no trespass order to prevent him from returning to the home.

Gerkin told police that he and the victim got into an argument and said the other male “flinched at him so he hit the male in the face with a closed fist 3 times and then left the home.

Gerkin was arrested on a charge of domestic battery.