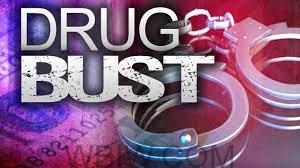 ORLEANS – Two people were arrested on drug charges after Lawrence County Sheriff’s Department deputies and officers with the Mitchell Police Department responded to a home at 11:20 p.m. on Saturday at 4378 Stonington Road in Orleans to serve an active warrant on a male.

When police arrived they knocked on the door and 29-year-old Collin Flynn answered and he was asked to step outside.
Flynn told officers the male they were looking for was not in the home.

Flynn told police the only person in the home was his son who was sleeping in a back room.

Officers entered the room to look for the wanted man.

While searching the home, officers found a box of used syringes beside a bed that the child was sleeping in.

While officers were inside, they received a call from the officer outside with Flynn saying he needed assistance. When officers ran outside they found that officer on the ground trying to detain Flynn.

Flynn was placed in handcuffs and detained.

The officers then asked where 30-year-old Abby Achephol was and Flynn said she was at a grocery store and would be back soon. Achephol resides with Flynn at the home and their child.

Police located a baggie of marijuana and a baggie containing meth mixed with heroin in Achephol’s pocket once she arrived back home and she was detained.

The child was removed from the home and placed in a family member’s care.

A search warrant for the home was granted by Judge Nathan Nikirk. Flynn then told the officers they would find scales in a backpack and a biohazard box with used syringes behind the bathroom door.

Achephol told officers they would find two spoons on the shelf in the bathroom, which they found. Officers also found syringes under the bathroom sink. In the backpack, they found another box of syringes and the scales. They also found another box containing another set of scales and additional syringes. In the kitchen officers located two “loaded syringes” in a trash can. Additional syringes were located in a bathroom.