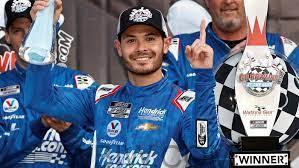 So with Chase Elliott firmly ahead deep in the final stage, Larson made a move for the front. He took pole position from his teammate Elliott and wouldn’t be denied, nabbing his second victory in as many years at the road course at Watkins Glen.

His margin over second-place AJ Allmendinger was .882 of a second.

Larson appeared somewhat apologetic for his decision to past Elliott after a race restart. But it’s all about winning in NASCAR.

There were five caution periods for a total of 11 laps. All but eight of the 39 drivers in the Go Bowling! At The Glen finished on the lead lap.

Custer earned his seventh top-15 of the season and his first top-15 in two career NASCAR Cup Series starts at Watkins Glen.

This was Harvick’s fourth straight finish of 12th or better at Watkins Glen. He finished eighth in this race last year, seventh in 2019 and 10th in 2018. (The NASCAR Cup Series did not race at Watkins Glen in 2020 due to restrictions related to COVID-19.)

Chase Elliott remains the championship leader after Watkins Glen with a 134-point advantage over second-place Larson.

The next event on the NASCAR Cup Series schedule is the Coke Zero Sugar 400 on Saturday, Aug. 27 at Daytona (Fla.) International Speedway. The regular-season finale begins at 7 p.m. EDT with live coverage provided by NBC and SiriusXM NASCAR Radio.