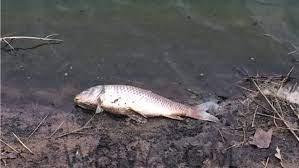 Fisheries biologists with the Indiana Department of Natural Resources visited Clear Lake on August 4 after residents reported numerous dead fish in the lake near Fremont, about 50 miles northeast of Fort Wayne.

While investigating, the DNR said they found around 500 dead fish including rock bass, bluegill, redear sunfish, pumpkinseed, warmouth, crappie, bullheads, and bass. They were found between the North and Big basins.

The state agency said Monday that natural events likely caused the fish to die. Hot weather, warm water, and days with no wind can lead to low levels of dissolved oxygen in the water.

“Without dissolved oxygen, fish are unable to breathe and can die rapidly and in large numbers,” the DNR said in a news release.

While the public health threat is considered very low, the agency said people should use common sense when visiting natural waterways, especially during periods of hot weather.