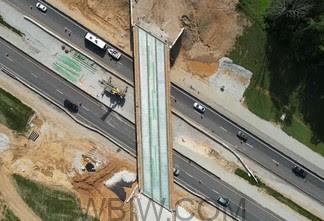 The excess dirt was compacted and used as fill elsewhere on the project, including the Morgan Street and Egbert Road extensions that opened west of S.R. 37 last week. Click here for a map of the new local access routes.

The temporary driveways for Martinsville First Methodist Church and Ozark Fisheries will close permanently this week. S.R. 37 remains restricted to two lanes – one in each direction – for temporary driveway removal, paving and striping in the area.

The project team hosted a field visit last week for state and federal agency partners to monitor environmental protection measures after construction in Morgan County and during construction in Johnson and Marion counties.

The new Bobby Helms Boulevard access road is taking shape in the Artesian Square Shopping Center. After it opens in the coming weeks, the Ohio Street driveways for the Martinsville Burger King and Kroger Gas Station will close permanently.

State Road 37 should expect intermittent traffic stoppages of up to 20 minutes on Tuesday night near Epler Avenue for the installation of overhead power and communications lines.

The utility work at Banta Road is preparing for the long-term closure of Epler Avenue west of S.R. 37, which is expected to begin in September.

I-465 traffic should continue to expect nightly lane closures for median removal and bridgework on the southwest side between S.R. 67/Kentucky Avenue and I-65. Work on the Carson Avenue overpass requires nightly closures of the southbound I-65 ramp to westbound I-465.

Work to rebuild S.R. 37 pavement for the new I-69 is reaching a halfway point. Look for northbound S.R. 37 traffic to shift onto new pavement north of S.R. 144 as early as next week. Southbound traffic is expected to shift about a week later.

The new S.R. 144 bridge over future I-69 is expected to open for traffic in September, resulting in the permanent removal of another S.R. 37 traffic signal.