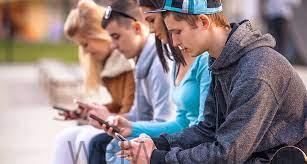 INDIANA – Nearly half of US teens say they use the internet “almost constantly,” according to a new survey released on Wednesday.

The survey of 1,316 teenagers delved into the technology habits of teens and was conducted by the Pew Research Center.

The percentage of teens who reported a near-constant level of online presence was markedly up from a 2015 Pew survey in which only about a quarter of teens reported that level of internet use.

The survey found that the social media platforms most frequently used by teens are changing as well, with video-focused platforms like YouTube and TikTok leading in popularity.

Facebook is no longer such a dominant force in the lives of American teens, according to the survey. Only 32% of US teens ages 13 to 17 say they now use Facebook. That’s down from the 71% of teens who said they used Facebook in a Pew survey conducted between 2014 and 2015.

YouTube was used by 95% of teens, according to the survey, with nearly 20% reporting near constant use of the platform, making it the most popular social network, followed by TikTok. Of teens who used TikTok, nearly a quarter reported near constant use.

In some cases, however, those efforts have created new headaches for the company. Many Instagram users, including celebrities Kim Kardashian and Kylie Jenner, recently criticized some of Instagram’s updates for making the platform too much like TikTok. Instagram has since walked back some of its changes.