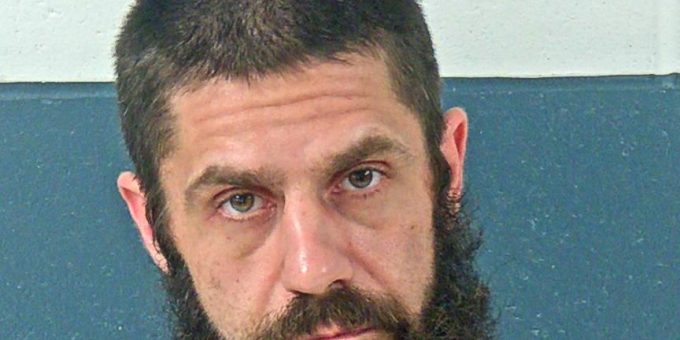 NEEDMORE – A Mitchell man was arrested on a warrant on numerous charges after Lawrence County Sheriff’s Department deputies were called on Tuesday, July 26th after a woman reported her ex-boyfriend 37-year-old Sean Moir had hit her car and left the scene at the storage units at 565 Old State Road 37.

She stated that Moir had thrown a drink in her face but she was not injured. She told the dispatcher that Moir had attempted to run her over and hit the rear passenger side of her vehicle with his vehicle.

She continued by stating that she and Moir had a physical altercation with Moir a few weeks ago at a home at 550 Stevens Lane. On that date, Moir was arrested on a charge of domestic battery.

When they met at the storage unit, they left in Moir’s vehicle to get drinks at a gas station.

She stated that Moir angrily accused her of watching his house. This accusation started a verbal argument between the two of them. Once they arrived back at the storage units, the woman started to get out of Moir’s vehicle. As she did, Moir allegedly grabbed her or the drink in her hand causing it to spill. Moir then threw his energy drink at her from inside his vehicle hitting her in the head with the can.

When the woman was standing near her vehicle, he attempted to run her over and struck her Ford Mustang in the rear passenger side then fled the scene.

She told the officer she believes Moir is using drugs, possibly methamphetamine, given his recent behavior and weight loss.

The officer attempted to call Moir but he would not answer the phone.

The officer found Moir in the parking lot of the Mitchell Presbyterian Church located on State Road 60 East. He admitted he had met the woman. According to Moir the woman allegedly threw her coffee at him during the argument. He denied grabbing her coffee cup as she was getting out of the mini-van. He did admit to throwing an energy drink at her but denied hitting her in the head with it.

He also confirmed that he had struck the woman’s vehicle when he was trying to leave.

After leaving the storage units, Moir said he drove to the Crossroads Church on Trogdon Lane before heading home to Mitchell.

The information was forwarded to the Lawrence County Prosecutor’s Office and a warrant was issued for Moir’s arrest on charges of domestic battery, criminal recklessness, leaving the scene of an accident, license violation, and a probation violation.