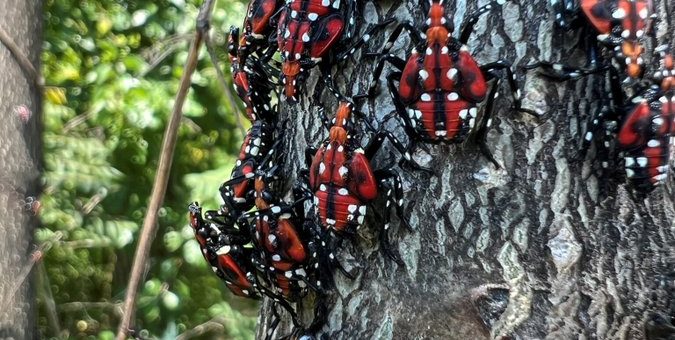 INDIANA – Spotted lanternfly (SLF) (Lycorma delicatula) was found in late July in Huntington, Indiana. This federally regulated invasive species is a serious new pest that harms plants by slowing their growth and reducing fruit production, especially in vineyards and orchards.

Finding this pest this far north of last year’s find along the Ohio River in Vevay, makes it possible for SLF to be anywhere in Indiana. Knowing where this pest is located can inform regulatory actions taken to slow its spread and reduce the harm it can cause.

Right now, the Indiana DNR is asking for all citizens to search for and report spotted lanternfly. The bright color of late-stage immatures and adults is easily recognized at this time of the year. Anyone who spots signs of the spotted lanternfly should contact the Indiana Division of Entomology and Plant Pathology (DEPP) by calling 866-NO EXOTIC (866-663-9684) or send an email (with a photo of the insect if possible) to DEPP@dnr.IN.gov.

For more information about this or other invasive pests see the following link.

Status of the known Indiana Infestation

After a Huntington resident reported “mutant ladybugs” feeding on trees of heaven on their property to a Huntington Neighbors Helping Neighbors” Facebook page, the message was forwarded to DNR’s Division of Entomology & Plant Pathology (DEPP). A business owner also reported finding an immature SLF to the DNR hotline.  DEPP staff surveyed the site and discovered multiple life stages of the insect present in trees and on structures near the railroad tracks. DEPP and USDA are investigating to determine exactly how large the infestation is and where it could have come from, as well as how to limit the spread and eradicate the population.

What is Spotted Lanternfly?

Spotted lanternfly is a planthopper that originated in Asia. It was first discovered in the United States in Pennsylvania in 2014. Its ability to lay eggs and hide difficult find places on structures and vehicles makes it easy to spread unknowingly by people. Both Indiana infestations are likely to have originated from this type of accidental spread.

The adult spotted lanternfly has two sets of wings, and the underwing has a very distinct red color with spots on the outer wings. The fourth instar of the insect is bright red with black and white markings. The egg masses of this invasive insect look like mud and they can be spread by vehicle transport including recreational vehicles, cargo carriers (truck transport), and freight trains. They can also be spread through trade materials sold in infested areas that are shipped out of state including nursery stock, outdoor furniture, lumber, etc. Anyone receiving goods from the east coast should inspect for signs of the insect, especially if the commodity is to be kept outdoors.