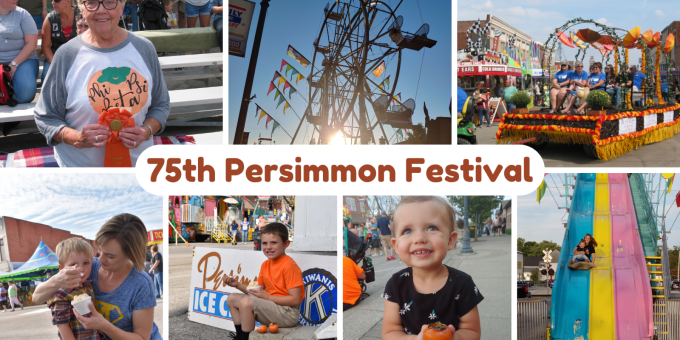 MITCHELL – A legacy like no other, that’s what George Bishop created in 1947 when the Mitchell High School physics teacher decided to stage a homecoming by organizing a three-day festival in late October that would serve to celebrate Lawrence County’s quirky little fruit, the persimmon.

What Bishop couldn’t have known at the time is the three-day little event would grow into one of Indiana’s premier festivals with tens of thousands of visitors packing the streets of Mitchell during the last full week of September each year for the past 75 years.

To honor the 75-year tradition of the Persimmon Festival, this year’s grand marshal will be Diana (Bishop) Chastain, who will serve to represent her father, George Bishop, during the festival he created all those years ago.

“I was 2 when Daddy started the festival, so I don’t even remember Mitchell without a festival,” said Diana. “And I’ve only missed three of them, two of those were for the delivery of my children.”

George Bishop, who grew up in Mitchell and spent almost his entire adult life in Mitchell, except for one year when he moved to New Mexico to assist with the World War II war effort, was a physics teacher at Mitchell High School before moving up to serve as principal. He would later serve as superintendent of Mitchell Community Schools, a position he held until his untimely death in 1965 at 58 years old.

“He started the Persimmon Festival because he wanted it to be like a homecoming,” Diana said. “He loved Mitchell so much, and he loved the schools.”

George’s wife and Diana’s mother, Maureen, was a member of Tri Kappa. In the early days of the festival, the Tri Kappa members had a food booth they manned to support their philanthropic endeavors before moving to Spring Mill State Park, where they began staging the Candlelight Tour in the 1960s. Maureen, too, loved the festival her husband created and was infinitely involved, even after her husband’s untimely death.

“We spent every night downtown,” Diana recalled. “It was just what we did. We ate down there every night, and while my parents worked the festival, I was like a little street urchin. I was there for the duration, but like the festival committee today, my parents came up with ideas and planned year-round. It was kind of an ongoing thing.”

As a Mitchell native, Chastain knows what the festival means to the infinite volunteers who plan it each fall and the people who congregate downtown to make it a success.

“When it’s festival week, you have to go downtown,” Diana said. “It’s just what you do. It’s a part of who we all are, everyone who loves the festival and enjoys it. It’s really small town life at its best.”

Diana and her husband Ron have spent their adult lives in the Indianapolis area, where Ron taught at Warren Central for 35 years before retiring. They were high school sweethearts at Mitchell High School and moved away, but never stopped loving the festival and its roots, which she continues to hold dear.

“Getting asked to represent Mommy and Daddy is a great thrill for me,” said Diana. “Daddy never cared if he got any credit for the festival. He just did it, both he and Mommy both, because they absolutely loved it. I can remember, as a child, he would get free ride tickets, and he would ask me to give them out to other school children who couldn’t afford them. He was generous in heart and spirit, and I know that’s what the festival was born out of. He’d be so proud of what it has become.”

George’s planning and devotion to the festival helped create a foundation for future generations, and Diana knows her father would be both thrilled and amazed at what the festival has become in its rich, 75-year history.

“He would be so proud and thrilled it’s still going on,” Diana said. “Looking back, it’s still amazing to me. The Persimmon Festival has always been special to my family, and it’s wonderful to see what it has become.”

Diana Chastain and her husband Ron will lead the parade, which steps off at 2 p.m. Saturday, Sept. 24, at Lehigh Field. The festival runs from Sept. 17-24.