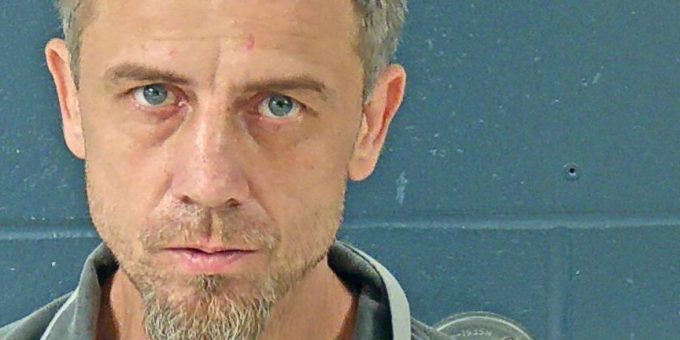 BEDFORD – A Bedford man was arrested after a report of a possible impaired man walking in the area of 18th and M streets.

A Bedford Police officer was finishing a traffic stop in the parking lot of Total Tan on M Street when a woman approached him driving a white SUV and reported she saw a male “doped out” and running back and forth across the street in front of traffic “nonstop” in the area of 18th and M streets. The woman reported the male was also “swaying back and forth while walking”.

The officer alerted a fellow officer of the complaint. That officer saw the male, later identified as 43-year-old David Johnson, of  Bedford,  run across the road twice without regarding the oncoming traffic.

The officer turned on his emergency lights and stopped Johnson north of 18th Street.

Johnson however disregarded the officer’s commands to stop and again crossed 18th Street to the south side without looking for oncoming traffic.

The officer got out of his vehicle and told Johnson to come to him.

Johnson crossed the street again to speak to the officer.

“He was unsteady on his feet and was making quick jerky movements and sweating profusely, the officer noted in the probable cause. “Additionally, the male spoke with a thick tongue and was hard to understand. He was also being uncooperative and was shielding the right side of his body from me.”

The officer asked Johson if he had anything illegal in his pockets or that would jab or stick the officer. That is when Johnson made a quick movement into his pocket. The officer grabbed Johnson’s hand preventing the movement and he was detained.

The officer noted that Johnson was “talking and was not making any sense”. The officer asked Johson where he was going and he kept saying “scratching my head thinking”.

Police say Johson was “completely uncooperative with officers to get him to a safe place where he was not in public view and not endangering himself by running back and forth in traffic”.

Once he was escorted to a police vehicle, Johnson continued to be uncooperative and refused to get in the vehicle, “he tensed up and had to be forcibly pushed into the vehicle”.

Another officer had to “drag him into the back seat from the other side of the vehicle and had to be sat upright in order for a safe transport”.

Once at the Bedford Police Department, Johnson continued to be uncooperative and “had to be forced to walk and he continued to turn into officers”.

He refused to sit down once in the processing room and an officer had to force him down onto the bench.

Police say Johnson “never made sense about anything he was speaking about and during transport to the Lawrence County Jail.

Johnson is facing charges of public intoxication and resisting arrest.