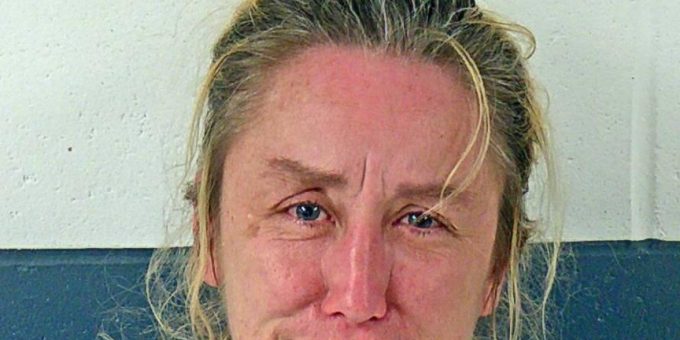 BEDFORD – A woman was arrested after Bedford Police officers were called to 13 Day Court apartments at 7:56 p.m. Sunday after a report of an unwanted intoxicated woman causing a disturbance.

When police arrived they were met by the woman’s two sons who said 44-year-old Kellie Allen was upstairs in an apartment causing issues.

Officers spoke to Allen who told police she had only been staying at the apartment for two days. The woman was told the occupants of the apartment wanted her to leave and she walked out into the parking lot.

She was told to collect her items and leave.

But at 8:40 p.m. officers received a second report that Allen was back at the apartment and would not leave.

When police arrived they found Allen sitting on the back porch. Multiple people were outside observing the disturbance.

As an officer was exiting his vehicle, a bystander approached the officer and handed him a pill bottle Allen had dropped on the sidewalk that a child had picked up.

Allen was told to place her hands behind her back because she was being detained. When the officer went to place the handcuffs on Allen she pulled away and had to be placed up against the police car to gain control and place her in handcuffs.

She was transported to the Lawrence County Jail on charges of criminal trespassing, resisting arrest, and public intoxication.