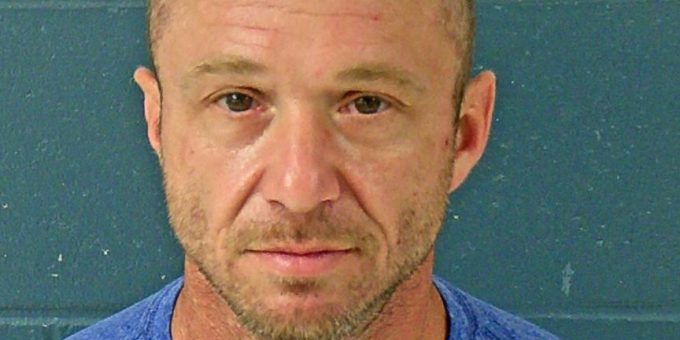 BEDFORD – A Bedford man was arrested early Friday morning after the driver he was with was stopped by a Bedford Police officer for a traffic violation.

According to a probable cause affidavit, on Friday at 2:16 a.m. an officer was on patrol when he noticed a red car traveling south on L Street. That vehicle had no operational tail lights.

The officer stopped the driver near the intersection of 17th and L streets.

The officer then asked if there were any illegal narcotics in the vehicle and asked for consent to search the vehicle. The driver denied that request.

The officer then identified the passenger in the vehicle as 43-year-old Travis Hillenburg, of Bedford.

While speaking to the driver, the officer noticed Hillenburg moving around in the passenger seat. Hillenburg was then asked to exit the vehicle.

But the officer said Hillenburg kept tucking his hands into his pants and when asked what he was doing he said, “just scratching”.

The officer said it appeared Hillenburg was attempting to hide something.

Another officer noticed Hillenburg adjusting the zipper area of his jeans. Hillenburg then asked if he could sit down.

Lawrence County canine Dusty then arrived on the scene and alerted officers to possible drugs in the vehicle.

Officers then conducted a probable cause search of the vehicle but no narcotics were located inside the car.

The officers then conducted a pat down on both the driver and Hillenburg.

Officers found nothing illegal in the driver’s pockets.

Hillenburg then willingly raised his shirt and pulled his underwear away from his body. When he did this the officer saw a tied, plastic baggie that contained a crystal-like substance believed to be meth.

Hillenburg was then detained.

The officer removed the baggie from Hillenburg’s underwear. The substance in the baggie tested positive for meth and weighed 2.06 grams including packaging.

Hillenburg was then arrested on a charge of possession of meth and transported to the Lawrence County Jail.

The driver was released from the scene.