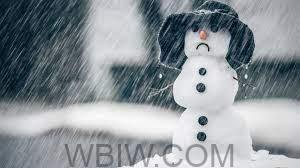 INDIANA – It’s hard to think about winter when we’re still in the thick of summer dealing with temperatures in the 90s and heat indices in triple digits, but as long as the Earth keeps revolving around the sun, these days will be behind us in the next month or so as Fall sets in, followed by the chilly temperatures of Winter.

And, if what the Farmers’ Almanac is predicting for this winter for Indiana, Kentucky, and Illinois pans out, we’re going to be begging for the hot and humid days of summer to return as quickly as possible.

The first day of winter and the shortest day of the year officially arrives on December 21, 2022, but that doesn’t always mean that the cold temperatures and snow storms will wait until then.

It’s important to keep in mind this is simply a prediction and no amount of fancy technology, atmospheric tracking, or to create this forecast is 100% accurate when it comes to Mother Nature.

Got flannel? Hot chocolate? Snowshoes? It’s time to stock up! According to the Farmers’ Almanac extended forecasts, this winter season we will have plenty of snow, rain, and mush – as well as some record-breaking cold temperatures. The Farmers’ Almanac is warning readers to get ready to “Shake, shiver, and shovel!“

According to their forecast, the “active storm track” will run from the western Gulf of Mexico to the northeast which could lead to “places to the north including Indiana could see lots of snow.

The first bite of winter should come earlier than last year’s. December 2022 looks stormy and cold nationwide with an active storm pattern developing and hanging around for most of the season over the eastern half of the country. Maybe there will be a white Christmas in some areas?

The first week of January in the Rockies and across the Plains. During this time, we see good potential for the heavy snow that may reach as far south as Texas and Oklahoma, followed by a sweep of bitterly cold air.

January 16-23, the Farmers’ Almanac raised another red flag for bouts of heavy rain and snow across the eastern two-thirds of the country followed by what might be one of the coldest outbreaks of arctic air we have seen in several years at possibly 40 degrees below zero.

A cold December and a very cold January might make readers in the Northeast shake and shiver. But February will bring milder temperatures that should make winter seem more bearable.

After the vernal equinox, when we should be slipping into spring, expect a lion-like end of March. There should be a wide variety of weather conditions, ranging from heavy snows to torrents of rain to gusty thunderstorms across much of the nation.

You can check out the rest of their forecast on the Farmers’ Almanac website.