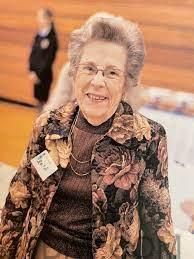 SPENCER – Hellen Eloise Holder Guthrie was a 24-year-old working as a secretary at a law firm when a pair of Navy recruiters shared just how exciting life as a sailor could be.

So, in August 1943 the Spencer, Ind., native joined the W.A.V.E.S (Women Accepted for Volunteer Emergency Service) of the U.S. Navy. More than 100,000 women would answer the call to be a WAVE, marking the first time women were
permitted to join in capacities other than nursing.

“The Navy sounded interesting,” she said. “My brother was in the Army, and he worked alongside General Patton, even.” Guthrie was assigned to Hunter College in the Bronx to get acquainted with the Navy and learn what her next role would be. When she completed her time at Hunter, Guthrie moved on to Yeoman School in Stillwater, Okla. It was there she was selected to work in the elite intelligence arm of the U.S. Navy.

“I went to the first training course at Hunter College, then went to Yeoman school,” said Guthrie. “There were nearly 400 students who began, and they only took the top 40 students to work in codes and ciphers.”

Petty Officer 1st Class Holder became a Specialist Q and headed Hellen at Rockefeller Center during some time off while assigned to Naval Barracks, Washington, where she would remain, working as a cryptographer in the Japanese section until the end of the war.

“The Navy is a wonderful place to be and to get an education,” Guthrie said. “We learned the war had ended when they came in and told us ‘Germany had surrendered!’ So, we went down to Dupont Circle and had a Coke to celebrate. We were a patriotic generation.”

“We lived in the first WAVE living quarters ever built for the Navy, but they encouraged you to move
after you made the rank of 2nd class because the barracks weren’t big enough to house all the new people coming in,” she said. “We were allowed to go find our own place to rent, but we still ate our meals in the mess hall.”

Guthrie rubbed shoulders with some famous people during her time in the Navy, from first ladies to movie stars.

“If you went to dinner and fried chicken was on the menu then you knew Eleanor Roosevelt was having a meal there,” said Guthrie. “I saw her many times there; she even would sit down right beside you and eat.” She continued, “D.C. was a wonderful place when I was there. I even met Robert Taylor – he was a lieutenant in the Navy.”

When the war ended, Guthrie returned to Spencer where she lived with her maternal grandparents. Her brother
returned as well, bringing a friend with him who would later become Guthrie’s husband of 62 years.

“Ralph was covered in dirt from a motorcycle ride the first time I met him,” Guthrie said. “He didn’t know how to pick green beans from the garden for dinner, which I thought was funny. He was pretty endearing and very charming — a good, good man.”

Ralph Guthrie served as a mess sergeant in the U.S. Army during World War II. After the war, he worked as a baker in Irvington, Ind.

The two had a son, Gene, and later lived in Indianapolis. Ralph was 91 when he passed away in 2009.

When Gene entered high school, Guthrie went to work at the Indiana Statehouse, serving in various roles in politics for many years. She met Presidents Ronald Reagan and Gerald Ford, was host to Nancy Reagan and Barbara Bush, and was awarded the Sagamore of the Wabash in 1983 for outstanding service to the state by then-Governor Robert Orr.

At a Spencer High School reunion in 2012, Guthrie was the last living graduate from her high school class of 28 students. On April 30, she celebrated 105 trips around the sun.

“I never thought I’d live this long,” she said. “There really is no secret to it, but I’ve lived an interesting life. My time in the Navy was an experience that you never forget, and it was something that I was very happy that I did, particularly because of the people you get to meet and the opportunities. It was wonderful.”

Article by Kristen Clark, of Indiana Department of Veteran Affairs.