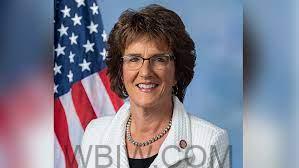 INDIANA – U.S. Congresswoman Jackie Walorski and two members of her staff died on Wednesday when the vehicle they were traveling in collided head-on with a car that veered into their lane, police in Indiana and her office said.

Walorski, 58, a Republican who represented Indiana’s 2nd congressional district in the U.S. House of Representatives, was mourned by President Joe Biden and her colleagues in Congress as an honorable public servant who strived to work across party lines to deliver for her constituents. The White House said it would fly flags at half-staff in her memory.

The congresswoman had been traveling down an Indiana road on Wednesday afternoon with her communications chief, Emma Thomson, 28, and one of her district directors, Zachery Potts, 27, the Elkhart County Sheriff’s Office said.

“A northbound passenger car traveled left of center and collided head on” with Walorski’s vehicle, killing all three occupants, the sheriff’s office said. The driver of the other car, 56-year-old Edith Schmucker, was pronounced dead at the scene, near the northern Indiana town of Nappanee, it added.

Confirming her death in a statement shared on Twitter by House Republican leader Kevin McCarthy, Walorski’s office said: “Dean Swihart, Jackie’s husband, was just informed by the Elkhart County Sheriff’s office that Jackie was killed in a car accident this afternoon.”

It added: “Please keep her family in your thoughts and prayers. We will have no further comment at this time.”

Walorski was a lifelong resident of Indiana, according to her official biography. She served on the House Ways and Means Committee and was the top Republican on the subcommittee on worker and family support.

“Janet and I are devastated by the tragic loss of our friend Congresswoman Jackie Walorski and her two staffers – Emma Thomson and Zach Potts – earlier today. Our broken hearts go out to her husband Dean and the entire family during this time of unimaginable mourning. At every level of public service, Jackie was known to be a positive force of nature, a patriot, and a relentless policy maker with unwavering loyalty to her constituents. Jackie’s record of achievement is impossible to quantify. She will be remembered as a fighter with a huge heart that always went the extra mile and I’ll treasure the times we walked a few of those together. Every waking moment for her was energetically devoted to improving the lives of all Hoosiers better, the epitome of a good and faithful servant. She, and the example she set, will be missed every day forward.”

Governor Eric J. Holcomb is directing flags in the State of Indiana to be flown at half-staff in honor of U.S. Representative Jackie Walorski, who passed today.

Flags should be flown at half-staff immediately until the date of her burial.

Gov. Holcomb is asking businesses and residents in Indiana to lower their flags.

Senator Mike Braun Wednesday offered his condolences and memories of Congresswoman Jackie Walorski on the Senate floor and called for prayers for the families of Emma Thomson, Zach Potts, and the Congresswoman as they grieve this devastating loss.

“I am deeply saddened by the loss of my dear friend Jackie Walorski. Jackie loved Hoosiers, her country, and served with honor in Congress. My prayers are with her family as well as the families of Zachery Potts and Emma Thomson”