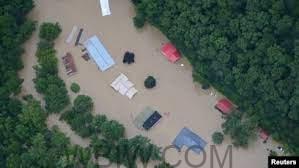 KENTUCKY – The response to some of the worst flooding in Kentucky’s history entered a pivotal phase on Saturday, as the search for victims accelerated over a battered stretch of central Appalachia.

The confirmed death toll stood at 25, according to Gov. Andy Beshear. But he added a grim prediction in a news conference on Saturday: “I’m worried that we’re going to be finding bodies for weeks to come,” he said.

A cold front brought in clearer weather to flood-stricken areas on Saturday, giving rescue personnel one obstacle fewer to contend with as they worked to pluck more residents off rooftops. More than 600 people have been rescued by aircraft by National Guard troops from Kentucky, Tennessee, and West Virginia, Governor Beshear said. He added that the Kentucky State Police and the Kentucky Department of Fish and Wildlife Resources had assisted in the rescues of more than 700 people by boat.

But rescue efforts continue to be impeded by rugged hills and valleys that remain hard to reach. And with rain in the forecast for Sunday and Monday, officials felt an urgency to make more progress before water levels had a chance to rise again.

On Saturday, Governor Beshear announced that 14 counties and at least three cities had declared a state of emergency.

Some Kentucky communities were either without electricity or cut off from cellphone service. Governor Beshear said on Saturday that 18,000 households were without power. The outages made it difficult for state leaders to accurately estimate the number of missing people.

The Portable Generator Manufacturers’ Association (PGMA) has developed messaging and materials related to safe operation. They are available to you now to use in your own messages to the public when discussing flooding, reminding them of this critical safety issue. We urge you to do so.

These materials can be found on PGMA’s safety website (http://www.takeyourgeneratoroutside.com), social media, video, monthly press releases, and radio PSAs. You can also visit PGMA’s main website for other resources (https://www.pgmaonline.com/).

Inevitably, when flooding happens, power outages will happen. PGMA will always reach out to remind you of the public’s risk of CO exposure when seeking alternative power. We urge you to consider how vital it is for owners to plan in advance and help us get the word out. This planning and awareness could save lives.