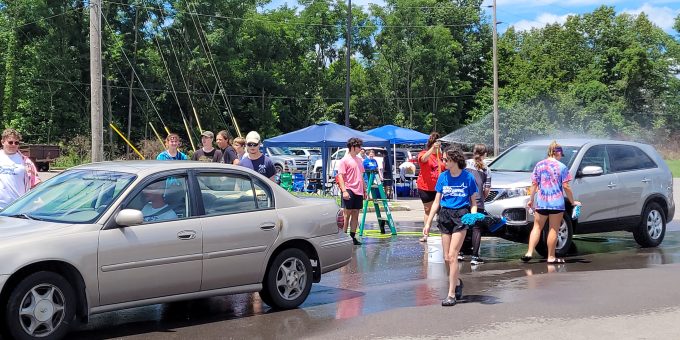 BEDFORD – Members of the Bedford North Lawrence Marching Stars held a free carwash in the Tractor Supply parking lot on Saturday, July 30th, to have the opportunity to give back to the community.

The event brought a steady stream of cars, wanting to come by and show their support of the team. While the carwash was free, there were fundraising efforts available from baking goods, to $5 hotdog meals.

The main thing that the group is raising funds for is a new band trailer, as their current one is over 30 years old, and beginning to show its age.

“Our trailer is over thirty years old and it is starting to dry rot, putting us in a situation where we are going to have to replace it,” said BNL Band Director Jim Jones. “We are trying to do efforts that we can that don’t just involve trying to just sell stuff, we are trying to make the community aware of what we are trying to do and fundraise for.

There was a steady flow of vehicles throughout the four hours the group was on-site, and bandmembers were willing to do whatever was needed to help make the event successful.

“I think it speaks volumes on one of the things we try to teach here, and that is that we are family. The fact that we have people that are willing to come back and help out, is great,” Jones said.