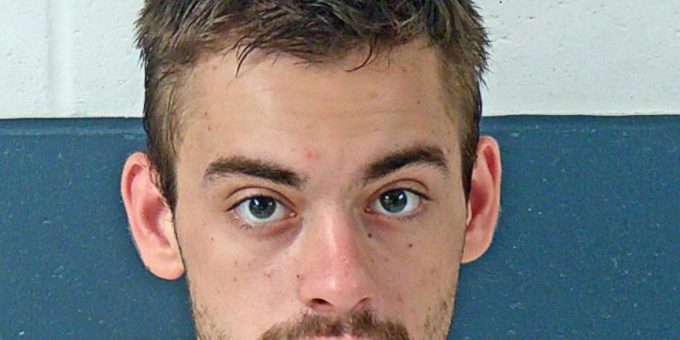 MITCHELL – A Mitchell teen was arrested Thursday after Mitchell Police officers were summoned to a domestic fight at 603 West Frank Street.

Prior to the officers’ arrival, they learned that 19-year-old Gavin Hall was on the property and was in violation of a no-trespass order.

The caller reported Hall was at the home and attempting to kick in the door.

When police arrived they found a hysterical female standing on the sidewalk in front of the residence. The woman told the police she was all right and then drove around the block looking for Hall.

Officers found Hall walking through a backyard towards the alleyway that goes behind 603 West Frank Street. The officer exited his police vehicle and ordered Hall to stop.

Police say Hall appeared to be distraught, his face was red and it appeared he had been crying. He was then detained. Hall fell to his knees and began crying loudly.

The silver aluminum baseball bat was located in a bush next to one of the busted windows on the west side of the house.

A neighbor told police they saw Hall damaging the mailbox and breaking the windows. That neighbor rushed to the home to check on the welfare of the woman.

As an officer returned to the scene with Hall, Hall was yelling in the back of the police car and shaking the vehicle from side to side. An officer opened the back door to speak with Hall and he continued to yell loudly. The officer told Hall to stop but he continued to yell and act erratically. Hall was arrested on charges of criminal mischief, criminal trespass, and disorderly conduct.