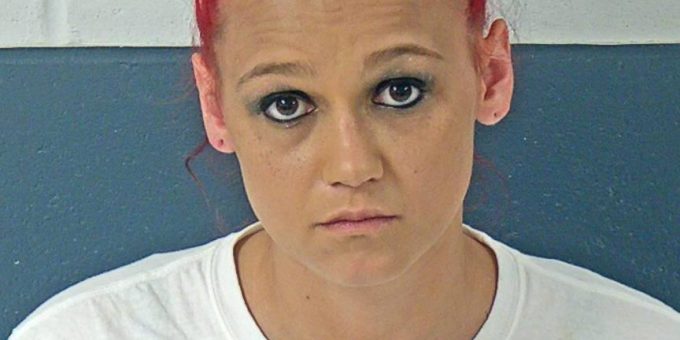 BEDFORD – A Bedford woman was arrested Monday night after a report of a woman passed out in a tanning bed at Total Tan on Mitchell Road.

The employee told the officer the woman had been inside the room for about 25 minutes after her bed had shut off and that they had knocked on the door several times without a response.

The officer also knocked on the door several times without a response but could hear the female 25-year-old Brittney Tincher inside. The officer told Tincher to open the door.

Tincher opened the door and told the officer she was “tired from working overtime”.

The officer said Tincher appeared nervous. An employee told police Tincher arrived in a red Pontiac G6 with a male driving. They stated that the male saw officers arrive and drove off.

Tincher refused to tell police who was driving the vehicle.

In Tincher’s purse officers located a 1mg cannabis oil cartridge that stated “This package contains cannabis, a schedule 1 controlled substance.” The cartridge tested positive for marijuana. Tincher admitted there was another cartridge in her bra.

Tincher was detained and she was advised if she transported any illegal narcotics into the jail she would be charged with trafficking with an inmate. She then stated that she had speed shoved in her underwear.

She was transported to the Bedford Police Department where a female officer retrieved the other drugs including 4.18 grams of crystal meth including packaging.

Officers then located the red Pontiac at 17th and M streets. The driver John Teagarden said he left Tincher at the business and went to see a friend and denied that he left because police had arrived on the scene.

He refused to allow officers to search the vehicle. Canine Maximus alerted officers to drugs in the vehicle. Police found two 1mg cannabis oil cartridges along with a vape which Teagarden stated belonged to Tincher. He was released from the scene.